"There's No Coexisting With Cancer,” “Kahane Was Right”

A fire police believe to a likely arson damaged the playground of the leading Hebrew-Arab bilingual school in Jerusalem Saturday night. "Kahane was right," "There's no coexisting with cancer," and other anti-Arab slogans were spray-painted on the building, as well. 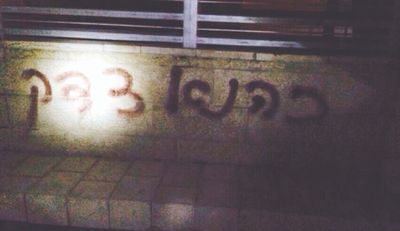 Above and above right: "Kahane was right" painted on a wall of the Max Rayne Hand-in-Hand School in Jerusalem, 11-29-2014 (Jerusalem Fire Department)

A fire police believe to a likely arson damaged the playground and building of the leading Hebrew-Arab bilingual school in Jerusalem Saturday night, Ha’aretz reported.

"Kahane was right," "There's no coexisting with cancer," "Enough assimilation," Death to Arabs" were reportedly spray-painted on the building, as well.

The 16-year-old Max Rayne Hand-in-Hand Jerusalem School is reportedly Israel’s largest Jewish-Arab institution and is co-headed by both a Jewish and an Arab principal. It’s parent body, Hand-in-Hand, is a nonprofit organization.

Over the past few months the school was reportedly repeatedly hit with similar racist graffiti, but this is the school’s first apparent arson.

The fire started in the playground in the school but reportedly burned parts of the structure itself, including classrooms, and bears hallmarks of arson.

"Even if they manage to dirty the school's walls, they will not manage to bring down our enterprise [of civil cooperation]. In addition to denouncing [these actions] expressing support, we invite the entire Israeli public to join us in the building of Jewish-Arab civil partnership in Israel. We will continue to develop our educational and social project, where every day 1,200 students come to study, some 200 teachers come to teach, and in which thousands of family members are involved,” the executive director of Hand in Hand, Shuli Dichter, said in a statement.

Jerusalem’s Mayor Nir Barkat condemned the incident, but appeared to be downplaying its racist, anti-Arab aspects.

"We will not allow pyromaniacs and criminals who take the law into their own hands to disrupt our daily lives. We will continue to denounce the extremists and do whatever it takes to restore the quiet to Jerusalem,” Barkat said – as if there could be some justification for the apparent arson but was condemning it primarily because was carried out by vigilantes rather than law enforcement.

Barkat also said the he spoke with Jerusalem’s Police chief "whose top priority is the investigation and the security of Jerusalem's children.”

Israel’s tepid and often nonexistent response to anti-Arab hate crimes and discrimination has drawn international condemnation, including from the United States Department of State, and a growing number of Israeli journalists and social commentators note that leading figures in Israeli life – like Barkat – are often tone deaf regarding this discrimination.

While it is not yet known who painted the graffiti at the Hand-in-Hand school or who set the fire, Israel’s internal security service commonly known as the Shin Bet has said that many, if not most, of the “price tag” anti-Arab, anti-Muslim and anti-Christian hate crimes committed over the past several years were committed by students and disciples of Chabad Rabbi Yitzchak Ginsburgh.

Ginsburgh – who holds no official position in Chabad – is the senior rosh yeshiva (dean) of the Od Yosef Chai yeshiva in the radical West Bank settlement of Yitzhar. He is also one of the most popular Chabad rabbis in the country with a large following among Chabad Anglo-Israelis, ba’al teshuvas and West Bank settlers and is seen by many as a spiritual successor to the late radical Rabbi Meir Kahane, who is considered by Israel and the US to have been a terrorist.

"There's No Coexisting With Cancer,” “Kahane Was Right”

A fire police believe to a likely arson damaged the playground of the leading Hebrew-Arab bilingual school in Jerusalem Saturday night. "Kahane was right," "There's no coexisting with cancer," and other anti-Arab slogans were spray-painted on the building, as well.