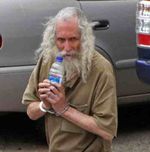 Hundreds of Breslov hasidim from New York, Miami and Belgium reportedly spent Shabbat with Rabbi Eliezer Berland in Amsterdam – the last Shababt Berland may have as a free man for quite some time.

Above: Rabbi Eliezer Berland in handcuffs in Zimbabwe, April 2014

Despite almost two years of running from the law over accusations that he sexually abused several of his female followers including at least one minor, Breslov hasidic leader Rabbi Eliezer Berland can still draw a large crowd of loyal followers.

A ruling on Berland’s possible extradition from Holland to Israel is expected tomorrow.

Berland, the rosh yeshiva (dean) of Breslov’s Shuvu Banim yeshiva in the Arab Quarter of Jerusalem’s Old City, previously hopped from country to country in Europe and North America before settling in Morocco last year. But when Berland’s alleged sex crimes became public knowledge and accounts of them were printed in the Moroccan media, Berland was expelled from Morocco.

He fled to Zimbabwe but was eventually arrested there and expelled. (The media in Zimbabwe dubbed Berland the "Sex Pest Rabbi.")

He fled to South Africa just before Passover, where he and his followers damaged rental properties and behaved in ways that shocked the local Jewish community. Acting on an international arrest warrant, South African police twice tried to arrest Berland but failed. After the second arrest attempt, Berland tried to flee to Rabbi Nachman of Breslov’s grave in Uman, Ukraine just before Rosh Hashana.

But he was arrested in Amsterdam’s international airport and is now awaiting a deportation ruling.

Berland may be spending his next Shabbat in an Israeli prison.

Hundreds of Breslov hasidim from New York, Miami and Belgium reportedly spent Shabbat with Rabbi Eliezer Berland in Amsterdam – the last Shababt Berland may have as a free man for quite some time.