« How’s This For A Wedding Gift? In Israel, If You’re Jewish And Marry Outside The Auspices Of The Haredi-Controlled Chief Rabbinate, You Could Serve 2-Years In Prison | Main | Haredim Refuse To Back Netanyahu As Next Prime Minister, Refuse To Enter Into Coalition With Likud, Until “Anti-Haredi” Legislation Repealed » 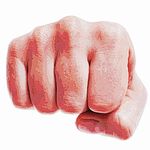 There was a fistfight Friday night in a haredi synagogue in the Jerusalem and Tel Aviv bedroom suburb of Beit Shemesh, Behadrei Haredim reported. The synagogue, Lev Eliyahu, is headed by Rabbi Moshe Goldstein.

Even though the mainstream haredi faction headed by Rabbi Aharon Leib Steinman and Chaim Kanievsky is also anti-draft, they are opposed to the tactics used by Auerbach and Edah Haredit, and they refused to participate in the rally.

Because of that, many of Goldstein’s congregants left his synagogue and opened a new one nearby that is loyal Steinman and Kanievsky. One of those former congregants of Goldstein, Rabbi Weissburd, became the rabbi of the new synagogue.

Just before Shabbat began, one of Weissburd’s congregants went back Goldstein’s synagogue and posted an invitation for the shalom zachar, thinking that because it was only a few seconds until sundown, no one would rip it down.

But he was wrong.

A few minutes after sundown, one of Goldstein’s congregants noticed the sign, ripped it down and tore it up, even though it was already Shabbat and such behavior is prohibited by halakha (Jewish law) on Shabbat.

The person who hung the sign was still there and started to argue with the man, pointing out that it was already Shabbat.

The man who ripped up the sign would have none of it and, instead of walking away he punched Weissburd’s congregant twice, knocking him unconscious.

Igud Hatzalah was called, and they treated the injured man, who refused to go to hospital because it was Shabbat.

On Saturday night after Shabbat, Goldstein and a group of his congregants reportedly went to visit the injured man to ask for forgiveness.

The incident is reportedly the talk of the non-hasidic haredi community worldwide.