« High Court: Couple Who Listened To A Rabbi Over A Doctor And Refused To Abort Seriously Damaged Fetus Must Pay For The Baby’s Care Out Of Their Own Pockets | Main | Rabbi Shlomo Riskin v. Haredim, Part 2 » 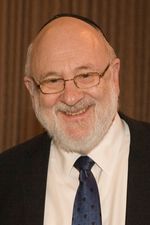 Weinreb, who is a psychotherapist with a PhD in psychology and who is presented by the OU and other  Orthodox sources as a scholar on domestic abuse, coaches Dalfin on how to deal with the alleged sex abuse committed by Shlomo Carlebach (who was for a time a Chabad-Lubavitch hasid and emissary). Dalfin claims that while Shlomo "chased women" at Stern College in 1960, that isn't the abuse Lilith Magazine and Ha'aretz accused Shlomo of, and Dalfin says his "research" shows that Carlebach's issue was  only "sexual desire" – not sex abuse.

Weinreb seemingly accepts this answer and agrees to submit a favorable review to dozens of media outlets – despite knowing that there lots of women who claim that Shlomo sexually abused them, and that some of those women were minors when the alleged abuse took place.

What you have here is extreme dishonesty, corruption and a craven disregard for the victims of sex abuse – all enabled and promoted by Weinreb, who the OU has presented as the champion of victims (an image Weinreb himself promotes), and who was given his job at the OU to help clean it up after the Baruch Lanner scandal. But the OU was never cleaned.

And here you have a good piece of evidence for why that is so.

Please start from the bottom and read upward:

Pl ask Yocheved to email me which of the email addresses bounced back bc they were incorrect.

Also, pl ask her to email yr review to my media list:

[Dozens of other Jewish media email addresses redacted by FailedMessiah.com]

If u dont mindl send it to the followinglaces, theyll more eadily accept it from u than me.


And any other media sites including seculsr press and websites.


Sent on the new Sprint Network

Here it is. A little over 700 words. Jewish Press may give you a little leeway since they like me. You can make modifications if you wish, but don’t submit until I see those modifications. This is written for JP not JA. JA has different style and different standards. Somewhere I noticed that you produced a CD with Chabad tunes sung properly. Can I get a copy of that? THW

May I see yr review pl?

How I can I trust a man who doesn't sing Modzitzer niggunim?! I should have informed you, in the interests of full disclosure, that my wife is a Modzitzer ainikel! I would love to schmooze--perhaps later in the week.

Sent from my iPhone

He wasnt a continuation of the gra vs alter rebbe machlokos , rather lakewood didnt allow chasidus to be learnt although he, his brthr and posdibly others wanted to study it.


Re abuse, I said I didnt find, based on my research, abuse. I did find sexual desire, etc. I related, first hand testimony from woman I know, that in 1960 he chased girls in Stern college. However that isnt the abue the 1998 Lilith mag acvuses him nor the oct 20, 2014 haaretz newspaper acuses him.


I dont sing his nighunim bc I was raised that he was treif. Since my research I feel diffrently but still dont sing his niggunim nor anyone elses e cept chabad niggunim which I was raied with and even produced a cd of 39 chabad nigunim, singing them, and teaching ppl the right way to sing the nigun and I also tell them abt thrhidtory of each nigun.


I hope this ishelpful. If u feel talking via phone would be necessary pl apprise a good time to talk.


Sent on the new Sprint Network

Problematic. Basically, you say you don't believe the accusers and that they may have just been rejected women etc. That won't go over well with the world of victims. Do you really never sing his niggunim? Do you know of his relationship with the Modzitzer Rebbe's son and successor who lived in Tel Aviv? Do you think that just as he had his women issues, preferring passive and vulnerable women, he also had issues with men, particularly strong men who did not idolize him? Can you also see him as the subject of the continuing machlokes between the Gra and the Baal HaTanya, with Rav Aharon and Rayatz playing their roles 150 years later and Shlomo's role as their "battlefield"?

Sent from my iPhone

So are u satisfied w the way I covered the abuse issue etc?

Sent on the new Sprint Network

Finished book. 600 words is fine. Swamped with stuff right now but will get back to it.

The JP said the review should be no more than 600 words.

Did u finish reading bk?