Decade-Long Bobov Succession Battle Not Over After All

Losing faction decides to ignore beit din ruling aginst it, gathers support of Israeli haredi rabbis to do so.

A day before a beit din (Orthodox rabbinical court) ruled that it has to stop calling itself "Bobov," the faction that lost the Bobov succession battle, Bobov 45, is set to hold a public rally to publicize rulings from leading Israeli haredi rabbis that say Bobov 45 can ignore the US beit din ruling against it.

In the haredi world, no beit din ruling is ever really binding – unless it favors you. 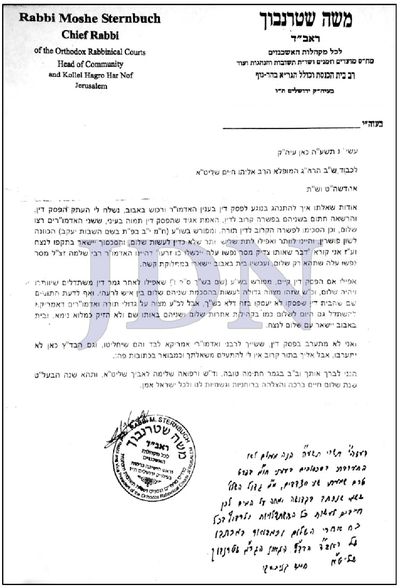 A rogh translation from a Bobov 45 source:

In the opinion of our Torah leaders - Rosh Av Beis Din of Yerushalayim, HaGaon

The Psak Din in Bobov is “Perplexing” Beis Din left the Bobover community in eternal battle, and this is a call for peace in which both sections of the community would be titled with the same name, as is customary in all other communities.

Recently, a letter written by the great Torah leader, Rosh Av Beis Din of the Eidah HaChareidus shlita, to one of the dayanim of the Bobover sect of Hagaon R’ Mordechai Dovid shlita, was brought to light. It expresses the opinion of da’as Torah regarding this bizarre verdict that riled up the general public in Eretz Yisroel and the world over throughout the past three months. This verdict was issued after lengthy litigation that was prolonged for nearly nine years. HaGaon R’ Moshe Sternbuch shlita responded in his letter that after seeing the Shtarei Birurin in which both sides agreed to reach a compromise as halacha dictates, he wonders how the Beis Din could completely cut off the party of HaRav HaGaon R’ Mordechai Dovid shlita from all of Bobov’s assets, and why they enforced eternal dissension. In regards to this, Harav Sternbuch says that “Upon the matter to which that tzaddik dedicated his life, his offspring will stumble” – meaning that after R’ Shlomo zt”l, the symbol of peace, dedicated his life to the pursuit of peace, the Beis Din destined all of Bobov to ongoing battle.

The Rosh Av Beis Din shlita wonders whether the verdict remains relevant, and writes that in any case, “it’s written in Shulchan Aruch that even after a case is concluded, attempts must be made that they should give in and there should be peace”. And he adds that “although the poskim wrote that the Beis Din that issued the verdict will not be involved in this, it is a mitzvah for all Torah leaders in America to try to foster peace, even now”.

And the Rosh Av Beis Din shlita continues that it is a mitzvah to try to attain peace. He writes that the Bobover communities should conduct themselves like the other communities all over the world which had been divided after the passing of their Rebbe zt”l and both sides now use the same name, without any of them suffering even an iota of damage. Thus, Bobov will remain peaceful forever. This is the opposite of Beis Din’s opinion, in which they sought to differentiate both sides, embroiling all of Bobov in eternal battle.

The Rosh Av Beis Din shlita concludes that although he and the Badatz of Eidah HaChareidus will not meddle with the verdict, he requests that Rabbanim and Rebbeim should arrive at a decision regarding this verdict and they should attempt to foster peace and negotiate a compromise between both parties.

HaGaon R’ Chaim Kanievski shlita added a handwritten message to the words of the Rosh Av Beis Din shlita, stating that: “we are obligated to do everything  possible and to seek peace with all our strength as it is written in the letter of the Rosh Av Beis Din of the Badatz, HaGaon R’ Moshe Sternbuch shlita”. And upon this statement, the Torah luminary shlita affixed his signature.

This letter made a strong impression upon the rabbanim who are involved in the matter and upon the Torah leaders who wish to protect the honor of our rabbanus and dayanus that have been so strongly besmirched in this affair. The words of Gedolei Yisroel shlita, the pillars of Klal Yisroel who have let their voices be  heard with strength, are refreshing waters to parched souls. They fulfill the words  of Chazal that declare, “Torah scholars promote peace in the world”.

But that source left out what Rabbi Chaim Kanievsky handwrote at the bottom of the Sternbuch's letter when he co-signed it:

Here's a photo of Kanievsky signing the letter with the additional language handwritten on it. Please click to enlarge: 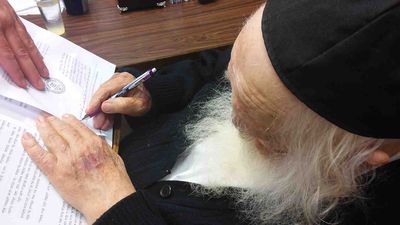 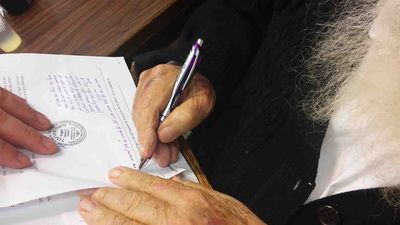 Decade-Long Bobov Succession Battle Not Over After All

Losing faction decides to ignore beit din ruling aginst it, gathers support of Israeli haredi rabbis to do so.