What Jewish Law About Abortion Says About Orthodox And Haredi Rabbis 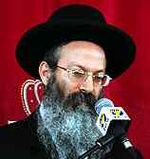 "…Therefore, in an extremely pressing situation, such as when the fetus suffers from Tay-Sachs or other severe defects, or the fetus is known to be a mamzer, or continuing the pregnancy could cause blindness or deafness to the mother [or is a risk to her life] - one can rely on the lenient opinion of the poskim [and abort]…"

Writing in the Hebrew-language weekly publication Besheva and translated into English by the right-wing Zionist Orthodox news website his family controls, Arutz Sheva, under the title "Judaism: Halakha on Abortion of Fetuses with Severe Abormalities," Rabbi Eliezer Melamed discusses a wide range of halakhic opinions with regard to abortion.

And within that wideranging article is this [emphasis added]:

…In the responsa ‘Rav Pealim’, the Ben Ish Chai was asked about a case of an ubar mamzer (a fetus conceived from a forbidden relation) in its fifth month – can it be aborted? He did not want to reply with an unequivocal ruling, but rather summarized for the questioning rabbi that in the opinion of Chavot Yair, when there is no great need it is forbidden l’chatchila (from the outset). And in the opinion of Maharit (1, 97), abortion is prohibited because of chabalah [causing unnecessary physical harm to the human body], and is permitted when necessary. Apparently from his words, he was inclined to be lenient. And in the responsa ‘She’elat Yavetz’ (1, 43), Rabbi [Yaakov] Emden permitted the abortion of an ubar mamzer.…

And even though the issue is very severe and seemingly it would be appropriate to take into consideration the opinion of the stringent poskim, nevertheless, in this instance it is proper to be lenient, because being stringent in such issues can cause terrible suffering to the parents and those born, and sometimes the suffering leads to the break-up of the family. Therefore, in an extremely pressing situation, such as when the fetus suffers from Tay-Sachs or other severe defects, or the fetus is known to be a mamzer, or continuing the pregnancy could cause blindness or deafness to the mother [or is a risk to her life] - one can rely on the lenient opinion of the poskim, for their opinion is substantiated to greater degree. This was the inclination of my rabbis, Roshei Yeshivot (heads) of the Mercaz Harav Yeshiva.…

In other words, Melamed and many (actually, likely most) of the other rabbis he cites – be they haredi, Zionist Orthodox, or from the time period before those two Orthodoxies existed – agree that if a fetus is known to be a mamzer, the woman can abort him.

What is a mamzer?

In perpetuity, a mamzer and his or her descendants are forbidden to marry an ordinary Jew, essentially because doing so would stain the lineage of the Jewish people.

But past the marriage restriction, mamzers were (at least on paper) treated like any other Jew when it came ot inheritance laws or even becoming king of Israel (if that occasion should ever arise).

You can see in this a great leniency, perhaps – especially if you are an Orthodox Jewish teen bearing a fetus conceived through your rape by your father, for example.

But you can also see a very sick and myopic view of the world that sees a child conceived by an long-term agunah (a 'chained' woman whose husband refuses to give her a Jewish divorce) and the man she wants to marry but can't because the rabbis have so twisted halakha that her husband is given an almost free hand to torture and extort her, sometimes for decades, while he himself moves on with his live and even, sometimes, is allowed to remarry.

A growing number of Orthodox and haredi rabbis of all persuasions are becoming more, not less, strict on abortion, not because of anything science or medicine has to say about the issue, but because they are shifting ever rightward, and because ever increasingly, rabbis look to top rosh yeshivas (yeshiva deans), not rabbis who are day-to-day decisors of halakha in the real world, for their guidance.

Because of that, it seems to me that it is much more likely for a rabbi to forbid aborting a Tay Sachs fetus or a mamzer conceived trough incest rape now than it was, say, 15 years ago.

But past all that, I find it disturbing that rabbis would allow (and in some ways, encourage) the abortion of a potential human life just because religious law will stigmatize that fetus after s/he is born.

The implications of this are truly awful.

Some twenty-five years ago my sister, who worked as a nurse at Shaare Zedek Hospital, told me that majority of Jewish babies who were born with Down’s syndrome and other far more severe defects came from religiously observant families. This was because the public is unaware that there are poskim who are lenient regarding having an abortion in cases of illness, and consequently, many women do not perform tests while pregnant. And even a woman who is tested and it turns out that her fetus suffers from severe defects, it is inconceivable to her that there might be room to ask a rabbi a halakhic question.…

Some people with Down Syndrome graduate high school and some even get post-secondary education.

Down Syndrome people live to be between 50- to 60-years old in the developed world (longer than the average 'normal' person lived 150 years ago.

Yet Melamed lumps them in with Tay-Sach's babies whose lifespan is only about four years, and who suffer greatly through all of those years.

What Jewish Law About Abortion Says About Orthodox And Haredi Rabbis

"…Therefore, in an extremely pressing situation, such as when the fetus suffers from Tay-Sachs or other severe defects, or the fetus is known to be a mamzer, or continuing the pregnancy could cause blindness or deafness to the mother [or is a risk to her life] - one can rely on the lenient opinion of the poskim [and abort]…"