A Chabad rabbi and his son have just been arrested for allegedly laundering money for a large London-based drug smuggling ring.

A Chabad rabbi and his son have been arrested for allegedly laundering money for a large London-based drug smuggling ring, Ynet and UK media sources are reporting. (The UK sources do not report the names or affiliations of those arrested. Ynet does.)

62-year-old Rabbi Chaim Yitzchok Cohen from Hackney, London – the director of the Beis Moshiach/Beis Menachem Community Centre – and his 34-year-old son (and rabbi) Dudi from Barnet are both Chabad messianists. (Even so, I'm told that Rabbi Dudi Cohen teaches in an official Chabad school in the Sudak family's offical Chabad organization.) The elder rabbi’s home and the Chabad community center he runs were both raided by police along with five other locations in Barnet, Hackney and Watford. 30,000 pounds in cash were seized, as well as computers and accounts books.

At least one other suspect is believed to have fled to Israel.

Police reportedly believe that the two Cohens were laundering money for the criminal gang through the accounts of their Chabad charity.

The drugs are counterfeit and were sold as erectile dysfunction, weight loss and other remedies through 400 different websites.

The two rabbis are reportedly in custody at a north London police station.

Police from the UK, Austria, France and Spain have been working for two years to bust the scheme.

“These so-called medicines are peddled on very professional-looking websites which feature convincing medical advice, but the people behind them have no medical training. When you buy a product from these websites, you have no idea what concoctions you are actually getting or the conditions in which they have been made. Drugs sold on such websites frequently contain harmful ingredients and have been made in unhygienic conditions. The criminals we are targeting prey on people who want medicine quickly, cheaply and discreetly. They don’t care if those people live or die as result of taking the drugs. They just care about the money,” Detective Chief Superintendent Tom Manson reportedly said.

Below: Inside the Chabad center nearing the end of the raid: 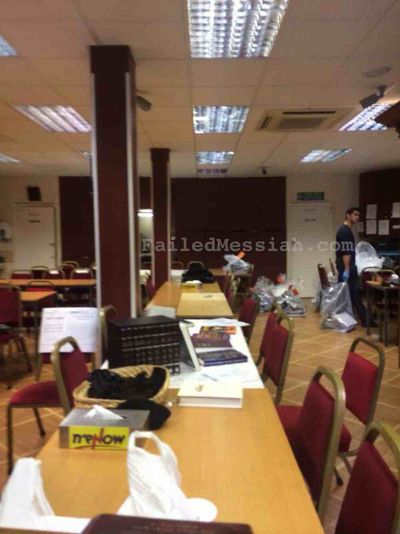 A Chabad rabbi and his son have just been arrested for allegedly laundering money for a large London-based drug smuggling ring.