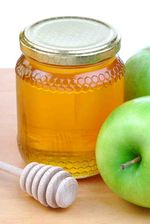 It turns out most of those 'ancient' Jewish customs most of practice on Rosh Hashana aren't really all that ancient. Here's a brief breakdown of the top few, including when they were first started and what they morphed into.

As reported earlier this week, Rosh Hashana appears not come to have been considered to be the Jewish new year until sometime after some Jews returned to Israel from the Babylonian exile and brought with them the Babylonian non-Jewish tradition of a new year commemoration, foreign to the Canaanites and to other peoples neighboring Israel – and from what we now know, likely foreign to Israelites as well. And Rosh Hashana likely did not become knwown as Yom HaDin (the Day of Judgement) until even later than that.

So when did the various traditions tied to Rosh Hashana as we now know it begin? Here’s a brief breakdown according to Ha’aretz (with further explanations added by FailedMessiah.com):

• Eating honey to start the new year with sweetness. During the Geonic era, which ran from about 589 CE (more than 500 years after the destruction of the Second Temple by the Romans) until 1040 CE with the death of Hezekiah, the last gaon to head the Yeshiva of Pumbedita in ancient Babylonia (which was located near what is the modern-day city of Fallujah, Iraq).

• Eating raisin hallah to start the new year with sweetness. During the High Middle Ages (about 1000 CE to 1300 CE), eating honey morphed into eating hallah with fruit. Eventually, that morphed into eating apples dipped in honey. Even so, raisin hallah – a leftover from the earlier custom – is still in vogue, as well, and it is very common to be at a Rosh Hashana table where both raisin hallah and apples and honey are served.

• Eating pomegranates because they have 613 seeds, the same number as there are mitzvot (Torah and rabbinic commandments). About the time hallah eaten with fruit was morphing into apples dipped in honey, eating pomegranates on Rosh Hashanah became a new custom based on the (false) belief that the average number of seeds in a pomegranate is 613.

• Eating a calf's head (yes, in order that we finish the year ahead). This custom also began in the Geonic era. Later, heads of sheep or goats were substituted for the calf’s head and even later, fish heads came to used – which is the custom among many Sefardi and some hasidic communities even today. Pre-hasidic Ashkenazi custom, which is still prevalent today, replaced fish heads and whole fish with gefilte fish – likely because the Ashkenazi community had already adopted a Shabbat stringency to not remove bones from fish on Shabbat due to the possibility that doing so might be a violation of the rabbinic Shabbat prohibition on borer (removing unwanted, spoiled or bad things from something good or wanted). Some Sefardi/Mizrachi communities eventually substituted fish stews like chraime for the whole fish or fish head, perhaps for the same reason.

• Tashlikh, emptying the contents of your pockets into a body of water or a well to symbolize casting your sins into the waters to be wased away or washed clean. The commonly observed tashlikh ritual is first mentioned only in the 15th century.

It turns out most of those 'ancient' Jewish customs most of practice on Rosh Hashana aren't really all that ancient. Here's a brief breakdown of the top few, including when they were first started and what they morphed into.