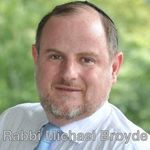 Being a liar and a cheat apparently doesn’t stop someone from being a rabbinic co-founder of a new Modern Orthodox synagogue or from teaching High Holiday classes there.

The new synagogue would be located at 2003 Lavista Road in the Toco Hills neighborhood of Atlanta in what is now a private home. It will not have a paid rabbi and will instead be led by a rabbinic va’ad (board) consisting of three rabbis. One is Broyde. Another is Rabbi Don Seeman, Broyde’s former assistant rabbi. The third is Rabbi Shlomo Pill.

Broyde and Seeman both teach at Emory University. Pill is a student of Broyde’s there.

Seeman is an associate professor of religion and has reportedly been a vocal supporter and advocate for Broyde, both within Emory and within the Modern Orthodox rabbinate, since the scandal broke.

Pill is a current student at Emory’s law school, where Broyde teaches, and is also a graduate of a rabbinical judge training program Broyde founded and led.

Broyde was replaced as rabbi of the synagogue he founded, Young Israel of Toco Hills, in 2008.

Until the Jewish Channel broke the story of Broyde’s fake identities last year – which were used in the letters sections of scholarly rabbinic journals and online to tout his own work and smear rabbinic opponents, and to join rival rabbinic groups to gain access to their private internal correspondence – Broyde was a rabbinic judge on the Beit Din of America and was a well-respected authority on Jewish law.

At Emory University, Broyde was a professor of law and a senior fellow at the Center for the Study of Law and Religion.

But while Broyde was compelled to resign from the Beit Din of America and later from the RCA, Emory University declined to sanction him. Instead, a pro forma investigation by Emory found no “evidence to substantiate the allegations” that Broyde created one of the false personas. But university investigators did not even bother to contact the editor of the journal Tradition, Rabbi Shalom Carmy, in which those particular misrepresentations by Broyde had been made.

Long after resigning from the Beit Din of America, Broyde’s C.V. continued to claim that Broyde was a rabbinic judge there. Those claims only appeared to stop after they were exposed by the media, including by FailedMessiah.com.

Broyde founded the Atlanta Dayanut Institute several years ago and as late as a few months ago, he was still was still reportedly listed as an instructor of rabbinical judge candidates there.

The president of the new synagogue is reportedly Yaacov Freedman, a producer at the TV network HLN, a sister network of CNN.

The new synagogue plans on applying for membership in the Orthodox Union (OU) “once a permanent board of directors is elected,” a synagogue announcement reportedly says.

The synagogue’s provisional board reportedly includes a staff writer from the Atlanta Jewish Times, Suzi Brozman.

Broyde, Seeman and Pill are all reportedly slated to teach classes at the new synagogue over the High Holidays.