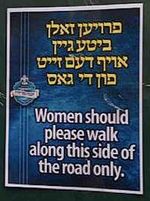 Haredi modesty posters warning women to walk on the opposite side of the street from men have been removed by London's Hackney Council. 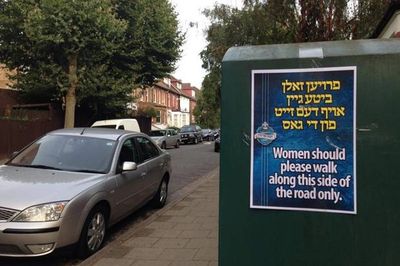 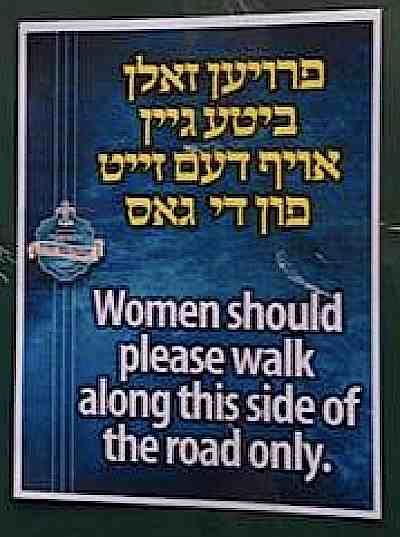 Posters warning women they should only walk on one side of the road have been taken down after they sparked a backlash.

The notices, which were put up along streets in Stamford Hill, were removed after residents complained to Hackney Council.

Written in both English and Hebrew, they read: "Women should please walk along this side of the road only".

The Shomrim group, whose Jewish volunteers support policing in the area, said they were put up by an orthodox Jewish group for a religious parade this week.

People from the religious sect are prohibited from touching members of the opposite sex unless they are married or closely related to them.

More than 20,000 Haredi Jews live in the area - the third largest group in the world.

Some people criticised the signs after pictures of them emerged on Twitter.

Ed Wells wrote: "More information on the signs would be better. It does come across very badly if you don't know the reason".

Another person said: "If I saw one of those, I'd walk on the other side out of sheer cussedness."

Stamford Hill West councillor Rosemary Sales described the posters as "unacceptable" and said they had been removed.

She told the Standard: "Several residents in my ward in Stamford Hill have drawn these posters to my attention.

"It is of course quite unacceptable to try to restrict women's movements in a public place and council officers removed these posters as soon as it was reported to them."

Superintendent Andy Walker, from Hackney police, said officers had spoken to the parade organisers about "potential misinterpretation" of the signs.

He added: "They have agreed that next year they will only by written in Hebrew and will be removed more swiftly after the event."

Chaim Hochhauser, from the Stamford Hill Shomrim group, said it had contacted the organisers to inform them the posters "lacked explanation".

He said: "We didn't know much about these posters until it was brought to our attention later on. We have since contacted the event organisers, and explained that these posters lacked explanation in the English text, and therefore could have offended people who don't understand the Hebrew wording and the logo."

A Hackney council spokesperson said: "As soon as the signs were brought to the Council's attention they were removed."

The Evening Standard has contacted the event organisers for comment.

In an unconnected incident, homophobic posters quoting lines from the Torah which condemned homosexuality have previously been taken down after they appeared on notice boards in nearby Amhurst Park.

Haredi modesty posters warning women to walk on the opposite side of the street from men have been removed by London's Hackney Council.