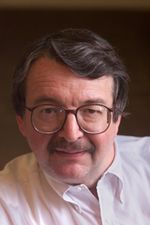 Many people think Joseph Berger of the New York Times is a dishonest and incompetent reporter who consistently minimizes the wrongdoing of Satmar and other haredim while glorifying their lifestyle. Berger allegedly argued against covering haredi child sex abuse and still claims that Williamsburg's notorious hasidic modesty squad doesn't exist – even though it very clearly does. In other words, lots of ex-hasidim and victims inside the haredi community think Joe Berger is an ass of the highest order – as one ex-hasid now writes.

First of all sorry my English sucks as a Hasid my language is Yiddish, but i will try to write in your language.

You start ur new book "the pious ones" writing about me, not me personal but all those hasidim like me who write to you to snitch on corruption re ur job as a journalist.

I read your book and i am troubled by your humanistic injustice & journalistic travesty.

Let me tell you my story, its like your character Shtriemel, unlike SD, the only 2 critical voices on hasidim, which btw i deeply respect SD for he is the pioneer writer and activist to help change things by us hasidim, but his father was Baal Tshuva intellectual so his hasidic roots aren't that deep like me and shtrieml. i was committing on SD's blog (i cc'd SD in this email) than i wrote my own blog and the modesty patrols, your so glowingly Hasid in the Shlomo Kenig which you fail to say is the deputy mayor in kesser their leader, and only got into the police bc of the block vote, falsely arrested me and shamed me exposed me hurt me as a sexual perv, he works in the vice department and bused his power, i cannot get my justice bc unlike SD, i am like Shtreimel cannot leave my family behind its not only kids its siblings and parents and wife and business colleagues and costumers and livelihood.

i am a dead man i have lost everything in my life i am walking zombie ppl talk about me as a sexual perv, and my family forced me to go to a psychologist fro the community who certified me as a crazy.

yet you quoted the Hasidic activist, a breach in journalistic standards, not telling ur reader that Alexander and Joseph are both a son and father team PR ppl for Hasidim. that the modesty patrol is just a few crazies... and that Sholomo Konig is a good man, while he is feared & despised deeply in the community as a corrupt partisan activist.

You dismiss Shtriemel as a not big in numbers, i don't have the numbers to prove you wrong maybe we r only a few, but footsteps is mainly for college education and me and Shtreimel and thousands more have no time to spend on secular education bc we already have households to work for overtime. Chulent group which u only mention in one word is a better picture of the hasidim every Thursday night you see there different hasidim hanging out, and Izeck shonfeld, also ccd, would have given you the real numbers of hasidim whom you call Moranos and i call zombies.

Deorah Feldman book (which i also cc'd) is mentioned in one line dismissively, although it gives the inside story of ppl like me and shtreimel, and it was a ny times bestseller, instead you opt to copy ad nauseam SD's writings, very lazy, but malicious i argue bc you say that feldmans characters sound to fictitious, while SDs accounts are to me more fictitious to me. i only relate to shtreimel & feldman.

Your book has no merit and i can see you just wanted to make a collection of all your reports with a pro hasidic bias so they leak you exclusives in the future. but i and many more hasidim are bitter you quashed our voices and added insult to injury to the hasidic terror, let me give you one incident you quote a hasidic PR guy laughing off a suicide of a hasidic mother as she was a crazy lunatic, i and everybody who dare to question our dogma is certified crazy by them, why cannot you see this?

Instead of doing your job and shining the light on hasidim as an objective book, you only quote one no hasidic voice Samuel Heilman (which i cc'd) but non critical more than one shtremel?! who long went under ground and is forced like me into silence bc we have kids that will be shuned for our big mouths.

not only that you actively condemn western modernity and praise the hasidic archaic old fashioned way of life thruout the book as documented here.

Let me give you a few exemples where you actively spread hateful hurtful lies, may be many more i am in a rush and it also has some critical words like reb moshe feinsteis isur on intervenes on yom kipur etc. but i will finish with what botherd me.

1. You spend thousends of words to impress the reader with the holy skver rebbe why not one word o his burning his dissident rotenberg.

2. yite shwarts is ur biggest character bc she had millions of kids like a rat, never mind the single issue that helped put satmar in the news was the weberman story that u only mention in a few lines not telling your readers that the whole book was given birth by his grandmother Yite shwarts.

3. i can go on and on pointing out more lies but i have to go to work now hopefully u will respond to this email and i can give u more anecdotes to correct if u will.

4. you finish your "pashkevil" book with hertz frankel badmouthing the forverts (which i also cc'd its boss) they they are dead dead dead dead that so beautifully sums up ur whole laziness of just regurgitating tiring empty cliches, know that the forward has now the only Yiddish daily and the hasidim have non. http://yiddish.forward.com/

to sum it up pls stop writing against us if u r lazy to report the facts. thanks and a good shabbes.

Posted at 11:15 AM in Books, Haredim, Media & Media Criticism | Permalink

Many people think Joseph Berger of the New York Times is a dishonest and incompetent reporter who consistently minimizes the wrongdoing of Satmar and other haredim while glorifying their lifestyle. Berger allegedly argued against covering haredi child sex abuse and still claims that Williamsburg's notorious hasidic modesty squad doesn't exist – even though it very clearly does. In other words, lots of ex-hasidim and victims inside the haredi community think Joe Berger is an ass of the highest order – as one ex-hasid now writes.