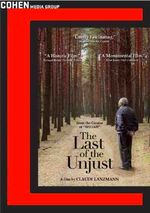 Acclaimed documentarian Claude Lanzmann's new Holocaust film Last of the Unjust is out on DVD – which lists for $39.98 – and you might win a free copy. Here's how:

Acclaimed documentarian Claude Lanzmann's new Holocaust film Last of the Unjust about Rabbi Benjamin Murmelstein, the last and only surviving president of the Jewish Council in the Theresienstadt ghetto and Chief Rabbi of Vienna during the Nazi years, is out on DVD and you might win a free copy. (Its retail price is $39.98 and it sells for $33.98 on Amazon.com.)

It's hard to construct a contest for something like this, so in lieu of the usual contest, I thought we'd do this: write a brief comment (no longer than 250 words) answering the following question. We'll pick the winner and get that DVD out to him or her ASAP. But to be eligible to win, you have to make sure to comment using a valid email address and you have to watch that email address and quickly answer our email notifying you that you won, because if you don't, we might give the DVD to someone else.

The question: International refugee and aid organizations and the UN all agree that the vast majority of African asylum seekers in Israel are legitimate refugees deserving of help – help that Israel is legally mandated to give under international agreements it previously signed. But Israel persists on labelling them "infiltrators," has given only a tiny handful of these destitute people refugee status and has (illegally, according to Israel's High Court of Justice) tried to force as many of these asylum seekers as possible to flee the country and illegally imprisoned thousands more of them in a desert prison camp.

Some people (myself included) see alarming parallels between how Israel mistreats African asylum-seekers and the treatment of Jewish refugees fleeing Hitler during the Holocaust.

Is that comparison right? Is it wrong? Why?

The contest ends Monday Wednesday morning at 9 am US Central Time.

Acclaimed documentarian Claude Lanzmann's new Holocaust film Last of the Unjust is out on DVD – which lists for $39.98 – and you might win a free copy. Here's how: