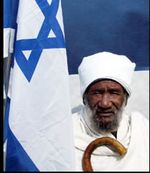 A 74-year-old man suffered serious injuries in the attack, including a fractured skull, and is still hospitalized at Beilinson Hospital in Petah Tikva.

Above: file photo used for illustrative purposes only

Late last week, two Ethiopian Jewish men – one of whom is elderly – were savagely attacked at gunpoint near the central bus station in Petah Tikva.

A 74-year-old man suffered serious injuries in the attack, including a fractured skull, and is reportedly still hospitalized at Beilinson Hospital in the city. The other victim, a 35-year-old man, suffered light injuries.

Two residents of Petach Tikva in their 30s were arrested today on suspicion of attacking the victims at gunpoint. A rifle was reportedly found in the home of one suspect. Both have reportedly linked themselves to the assault and were remanded for six days.

"I am ashamed and shocked by this hate crime. There is no need to try and prettify the ugly truth. The violent attack was only carried out on the basis of the victims' skin color. There is no room for such crude racist events in Israel. I expect and demand that those responsible for the heinous attack be punished with the utmost severity, so that justice will be seen and feared. There is a feeling that there is laxity in the judicial system, which is supposed to be the first to send a clear message against citizens who are attacked solely because they are who they are,” Tamano-Shata, who is herself an Ethiopian Jew, told Arutz Sheva.

A 74-year-old man suffered serious injuries in the attack, including a fractured skull, and is still hospitalized at Beilinson Hospital in Petah Tikva.