The Myth Of The Temple Menorah And The Vatican Exposed By Leading National Newspaper – With The Help Of YU Professor, Class

The menorah – the size of a human being and made of solid gold – is purportedly being held captive in the bowels of the Vatican, many Orthodox and haredi rabbis believe. But is this true? 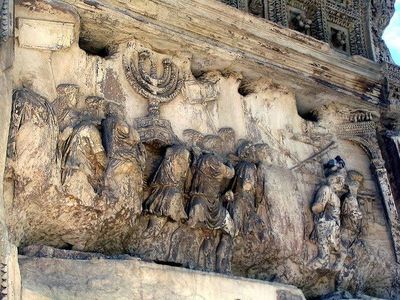 The Arch of Titus in Rome depicting the Second Temple menorah being carried off to Rome by Jews made slaves during the destruction of Jerusalem in 70 CE.

The Myth Of The Temple Menorah And The Vatican Exposed By Leading National Newspaper
Shmarya Rosenberg • FailedMessiah.com

Yeshiva University history Professor Steven Fine had one of his classes investigate the claim that the menorah from the Second Jerusalem Temple was being kept hidden in the Vatican, the Wall Street Journal reported tonight.

Did Fine's students find the priceless object or at least find any crdible proof the Vatican is holding it?

Fine – who has been studying the menorah and the myths and legends surrounding it for two decades, and who has an academic book on the topic slated to be released next year by Harvard University – decided to make this a class assignment at the Modern Orthodox university after an Israeli Orthodox rabbi, Yonatan Shtencel, wrote then-Israeli President Shimon Peres and asked him to strongly urge the Vatican to return the Menorah to Israel when he visited with the Pope there earlier this year.

The Jerusalem Temple was destroyed by the Romans in 70 CE – almost 2,000 years ago – and many of the treasures contained within it were carried off to Rome. That apparently included a solid-gold menorah the size of a full-grown human being.

So why ask the Vatican, which was only established hundreds of years later to cough up the menorah?

While the WSJ is too polite to say it, the answer is clear – Orthodox rabbis who often lack credible (or any) secular education and critical thinking skills.

These rabbis, and through them many other Orthodox Jews of all persuasions, believe the Vatican inherited the Roman Empire’s wealth. And since the menorah is depicted being carried off to Rome on the famous Arch of Titus there, ergo the menorah must now be in a vault in the basement of the vatican. After all, where else would it be?

But this claim is almost certainly false, as Fine already knew – and as his fearful Modern Orthodox students, many of who presumably believed this rabbinic fairy tale, were about to discover for themselves when they set out to research the claims made by Shtencel in his letter to Peres.

They examined the sources Shtencel cited and found that, despite Shtencel’s claims to the contrary, there were no actual eyewitness accounts of the temple artifacts inside the Vatican. And the Vatican itself denies having the menorah.

And then there’s the little matter of world history – a subject the vast majority of haredi rabbis worldwide (and even Zionist Orthodox rabbis in Israel) know little to nothing about because most have nothing but a rudimentary secular education, at best. (Many rabbis attended yeshivas that teach no secular subjects at all and have never studied anything outside of traditional Orthodox religious texts.)

Professor Fine puts it this way. Barbarians sacked Rome in the fifth and sixth centuries CE and probably took the menorah, if it still existed, and melted it down, using the gold for other purposes.

"I say to people when I give lectures, 'Gold doesn't disappear. Maybe you're wearing the menorah in your ring,’” Fine said.

After doing their own research, Fine's students wrote Peres this summer, disputing every assertion Shtencel made in his letter and showing there were in fact no known eyewitness accounts of the menorah being seen inside the Vatican. Peres, who left office earlier this month, hasn’t yet responded.

Shtencel told the WSJ he hadn’t read the YU students’ letter because it is written in English, a language he does not speak. Nonetheless, he dismissed the students’ work out of hand.

“These aren't my claims [that I made to Peres]. I am relying on several extremely serious sources,” Shtencel said.

One of those sources is Shimon Shetreet, a former Minister of Religious Affairs and Labor Party politician who served under Peres when he was prime minister after the assassination of Prime Minister Yitzhak Rabin.

Shetreet claims he raised the question of the looted Temple treasure, including the menorah, during a meeting with Pope John Paul II in 1996 and again with the Vatican's secretary of state. Supposedly, neither answered him.

"No one can dispute that they were taken to Rome. The question is what happened. It lies between legends, rumors and facts,” Shetreet said.

The Vatican told the WSJ the claims the menorah and other Temple artifacts were being kept hidden inside the Vatican were “fantasy.”

"I had heard once in the past rumors about such [a] story. But I never thought it was worthy of attention. It belongs to the genre 'mysteries of the Vatican,' in which some people exercise their fantasy,” Reverand Federico Lombardi, a Vatican spokesman, said.

Paolo Liverani, now a professor at the University of Florence, told the WSJ that when he previously worked in the Vatican as a museum curator, he would receive letters every year from people asking about the menorah, but never saw it or other Temple artifacts in the Vatican storerooms.

“[But] it is very difficult to demonstrate things that don't exist,” Liverani said.

Worse yet for Shtencel, Shetreet and other proponents, the myth that the Vatican is holding the menorah began a bit later than they realize – during the 1950s and '60s – and in the US, scholars say.

"There's a whole world of subterranean manuscripts and antiquities. A lot of that world is real,” Professor Lawrence Schiffman, Director of the Global Institute for Advanced Research in Jewish Studies at New York University, told the WSJ.

But, Schiffman said, the theory that the Vatican is holding the menorah isn't true.

"The story was created in the 20th century. There's no historical continuity [to it],” Schiffman, who is himself Orthodox with heavy Chabad leanings, said.

More Proof The Lubavitcher Rebbe Was Wrong About The Menorah?

Ancient Synagogue Found: Among Oldest In World, It May Reveal Secret Lost For 2,000 Years – And Prove The Rebbe Wrong.

The Little Menorah That Didn’t.

The Little Menorah That Didn’t, #2.

The Rebbe And The Menorah.

The Rebbe And The Menorah, 2.

An Early Hanukka Present: The Rebbe and the Menora.

The Myth Of The Temple Menorah And The Vatican Exposed By Leading National Newspaper – With The Help Of YU Professor, Class

The menorah – the size of a human being and made of solid gold – is purportedly being held captive in the bowels of the Vatican, many Orthodox and haredi rabbis believe. But is this true?