« Haredim And The IDF: Don't Call Them Our Soldiers | Main | Video: Siblings Of Missing Haredi Yeshiva Student Speak Out »

Jewish Day School Named For Billionaire’s Family Can Violate US Labor Law Because It Is A Religious Institution, National Labor Relations Board Rules

It's another embarrassment for the Conservative Movement and for the organized Jewish community – although its not likely many machers in charge will ever realize that. 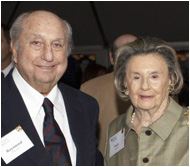 Above: Raymond G. and Ruth Perelman. He sits on the school's board of trustees and is active member but has done nothing to stop what some call the rape of the Conservative day schools' teachers

Jewish Day School Named For Billionaire’s Family Can Violate US Labor Law Because It Is A Religious Institution, National Labor Relations Board Rules
Shmarya Rosenberg • FailedMessiah.com

A Jewish day school which unilaterally decided not to negotiate with the union that had represented its teachers since 1976 will likely escape punishment because its violations of Labor law took place inside a religious institution, the Philadelphia Jewish Exponent reported.

The National Labor Relations Board dismissed a complaint against the Raymond G. and Ruth Perelman Jewish day school in Philadelphia saying in a letter that it lacked jurisdiction.

Raymond G. Pereleman and his wife Ruth are the parents of billionaire Chabad supporter Ronald Perelman and are extremely wealthy in their own right. Raymond G. Perelman sits on the day school’s board of trustees and is active in Jewish community and in running his RGP Holding, Inc., despite advanced age. On a tribute page to the Perelmans, the University of Pennsylvania describes Raymond G. Perelman’s company as “a privately held holding company comprised of a vast array of manufacturing, mining and financial interests.”

The school school is affiliated with the Conservative Movement and is a member of its Solomon Schechter network of schools. It's slogan is "academics, ethics, community."

The school’s board repeatedly claimed its decision to unilaterally refuse to negotiate with the school’s longtime teachers union was legal because the Perelman School is a religious institution and therefore is exempt from National Labor Relations Board jurisdiction.

The American Federation of Teachers reportedly plans to appeal the National Labor Relations Board decision. However, that appeal must be filed by September 5.

“It’s still immoral and unethical for a Jewish school to do this – it’s just wrong,” Ted Kirsch, the president of the American Federation of Teachers Pennsylvania chapter, told the Philadelphia Jewish Exponent.

The Conservative Movement has been rocked with a number of similar scandals. After plans to launch its ethical kosher supervision, Magen Tzedek, were announced, a survey showed that many Conservative institutions mistreat their employees. In some locations, janitors were found to be working for not much more than minimum wage with no benefits. Teachers were scheduled as part time employees so the synagogues and schools could avoid paying benefits. And some employees in the movement had no retirement plans.

While some Conservative institutions fixed those problems in response the survey, many others did not.

But this type of mistreatment of employees is not confined to the Conservative Movement. Similar issues are commonplace in haredi schools and synagogues, as well.

Jewish Day School Named For Billionaire’s Family Can Violate US Labor Law Because It Is A Religious Institution, National Labor Relations Board Rules

It's another embarrassment for the Conservative Movement and for the organized Jewish community – although its not likely many machers in charge will ever realize that.