« What Killed Haredi Yeshiva Student Aaron Sofer? Likely That He Did Not Own A Cellphone | Main | Israel High School Teachers Warn Of Increased Racism In Wake Of Gaza War » 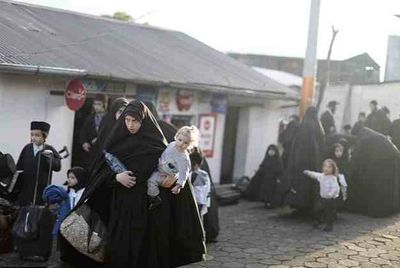 Above and above right: Lev Tahor expelled from small Guatemalan town, 8-29-2014 (Reuters)

An edict from a group of indigenous elders in the town of San Juan La Laguna, 150 kilometres west of Guatemala City, said that the Lev Tahor members were no longer welcome in the lakeside town.

It was the culmination of a dispute with the local community that escalated in recent days with some Lev Tahor families having their water supply cut off and being threatened with violence, Nachman Helbrans, the son of the group's spiritual leader, Rabbi Shlomo Helbrans, told the Star.

The move was denounced by another prominent Jewish leader in Guatemala. Rabbi Shalom Pelman, who leads the Chabad Lubavitch congregation in Guatemala's capital city, said it is the type of activity that brings to mind the treatment of Jews in Nazi Germany.

“This is not typical in the world I live in. Even in Iran, Jews are not expelled,” he told the Star in a telephone interview.

The edict to leave was delivered Wednesday after Lev Tahor and the Council of Indigenous Elders, representing the majority Christian population, were unable to negotiate a solution to their clash of civilizations.

Lev Tahor, a radical strain of Hassidic Judaism, was founded by Rabbi Shlomo Helbrans in Israel and flourished after he moved the group to the U.S. in the early 1990s. While living in New York, Helbrans was jailed for kidnapping a young follower. He was deported to Israel after serving a portion of his prison sentence. In the early 2000s, he moved his group to the Quebec town of Ste-Agathe-des-Monts.

Problems began several years ago when encounters with Quebec's child protection authorities led to suspicions the group was carrying out underage marriages, forcing members to take powerful and unnecessary psychiatric medication and raising their children with no access to doctors or proper education. That prompted a raid in August 2013 and proceedings to have more than a dozen children taken into foster care.

Nachman Helbrans said that two children remain in foster care in Chatham-Kent and a number of families are still fighting in Ontario court to overturn a ban on obtaining Canadian passports so that children can be reunited with their parents. In some cases, those parents have fled the country or been deported for immigration violations.

But the majority of Lev Tahor members have reconstituted their community in the tourist town on the shores of Lake Atitlán.

“They want to be on their own, they don't believe in the schools, the educational systems here, so they do their own things,” he said in an interview. “So the leaders talked about the future of the community and said they can live in Guatemala, we don't care, but they should live in a separate place, not inside a community.”

A spokesman for the indigenous council, Miguel Vasquez, said the decision was made to protect the culture of the local population.

“We act in self-defence and to respect our rights as indigenous people,” he told Agence France-Presse.

Cholotio also said there were concerns about the oft-repeated accusation that Lev Tahor children are forced to marry as early as 13 years old. Lev Tahor has repeatedly denied this claim, and says the community always abides by the laws of the place in which they reside.

With files from Jane Gerster

The claim that Lev Tahor "always abides by the laws of the place in which they reside" is clearly not true. The group has a long history of defying secular law, including in Canada, and the Toronto Star knows it.

At the least, the Star should have pointed out not only the child abuse allegations against the cult, but the multiple documented violations of court orders that have taken place, even when the individual or the group's leaders promised to obey.

The Daily Mail adds some important information about what upset locals about Lev Tahor, and has the decency to note that some people condemn Lev Tahor as a "cult-like sect":

…Miguel Vasquez Cholotio, a member of the elders' council, said the villagers decided to expel the group because they refused to greet or have physical contact with the community.

'We felt intimidated by them in the streets. We thought they wanted to change our religion and customs,' he said.

Antonio Ixtamer, who lives in the community, said that several members of the group had upset residents because of their 'arrogant' attitude.

He said they would go into stores and pay whatever they wanted for the products rather than the marked price and that they bothered tourists.

'On one occasion there was a tourist taking pictures of a hill and the Jews thought he was taking photos of them and they clashed,' Ixtamer said.…