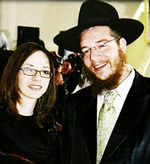 Chabad's Nairman House in Mumbai, India is supposed to finally reopen Tuesday, almost six years after the terror attacks in Mumbai, one of which killed six people in Nairman House – including the Chabad couple who ran it, Rabbi Gavriel and Rivky Holtzberg.

Above: Rabbi Gavriel and Rivka Holtzberg

Six years after the 26/11 terror attacks on Mumbai, one of the targets under attack is finally ready to reopen. The six-storey Nariman House, home of orthodox Jewish movement Chabad-Lubavitch, will be reopening on August 26.

Six people from the building, including Chabad-Lubavitch Rabbi Gavriel Holtzberg and his wife Rivka, were killed in the 2008 terror attack.

Ever since, the Chabad-Lubavitch has continued its activities in temporary locations throughout the city as Rabbi Israel Kozlovsky and his wife Chaya serve as the organization’s directors here.

“This building was continuously operating until the attack,” said Rabbi Israel Kozlovsky in a press statement. “We’re not moving into a new building; we are returning to our original building and we will be continuing and expanding all the activities that took place here,” he added.

The reopening will also include the unveiling of plans for a $2.5-million Jewish Museum that will occupy the fourth and fifth floors of the building, stated the press release from the Chabad-Lubavitch movement. The museum which will be set up in the memory of the victims has been planned to keep the memories of the terror attacks alive.

“You can overcome challenges, even the most horrific of challenges. You can and must rebuild, and this project serves as a beacon of light and hope that evil will not prevail,” Rabbi Moshe Kotlarsky, vice- chairman of Merkos L’Inyonei Chinuch said.

Moshe Holtzberg, the surviving child of Rabbi Gavriel Holtzberg and his wife Rivka, is supposed to have the option of taking over the Chabad House when he becomes an adult in about 10 years.

Moshe, who was 2-years-old at the time of the attack, was saved by his Indian nanny, who risked her life to get him to safety

Chabad raised millions of dollars to help care for Moshe and support him in the future, but has never published an independent accounting of the money, and it fought with the Holtzberg's family over control of Nariman House and alleged embezzlement of some of those funds by Chabad. The case was eventually dropped and apparently settled out of court.

Will Moshe Holtzberg really get Nariman house 10 or 12 years from now?

I'd say that is unlikely, just like he'll likely never see the majority of the money that was raised in his name.

Chabad's Nairman House in Mumbai, India is supposed to finally reopen Tuesday, almost six years after the terror attacks in Mumbai, one of which killed six people in Nairman House – including the Chabad couple who ran it, Rabbi Gavriel and Rivky Holtzberg.