« Why Do Haredim Do Metzitzah B’Peh, The Dangerous Circumcision-Related Practice That Has Killed And Maimed Babies? | Main | Most Hasidic Groups In Israel Will Keep Yeshivas Open During Summer Vacation Due To The War » 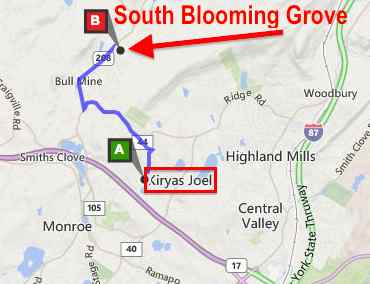 A group of Satmar hasidim from the Aharon faction, which is based in the Satmar hasidic Village of Kiryas Joel, purchased more than 750 acres of land in South Blooming Grove, New York eight years ago. The group has just filed a plan to use that land to build a new hasidic community, the Times Herald-Record reported.

The group previously tried to build on the property, but disputes with the village over scope and density of the development derailed their plans.

But now Keen Equities, which filed for bankruptcy protection in November of last year, has filed an application with the village planning to develop 512 single-family lots, 54 duplex lots, along with 20 acres of nonresidential development that would include 100,000 square feet of commercial space along with needed infrastructure like roads and utilities. The development will be built on Clove Road, off Route 208 in the village.

The hasidic subdivision would be built on 708 acres. 566 acres of that land would be left as permanent open space – although such promises could easily be broken if hasidim were to gain control of the village government, which is likely. About 38 acres of the property is reportedly wetlands, meaning only 140 acres would be used for development.

Keen Equities reportedly bought the former Lake Anne Country Club for $15 million in 2006 from the Greene family (who also financed the sale by giving the hasidim a $10 million mortgage), with the declared intent to build "multi-family housing to accommodate the growing needs of the Satmar Community in Kiryas Joel.”

But Keen Equities defaulted on that loan, and the Greene family reportedly filed for foreclosure in January 2011.

Keen Equities filed for bankruptcy protection in November 2013 before the foreclosure could be granted by the court.