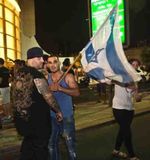 Above: "The Shade," Yoav Eliasi, and right wing thugs in Tel Aviv tonight

One leftist man was reportedly rushed to Ichilov Hospital after he was beaten by the right wing thugs.

Police say no arrests were made.

Several hundred leftists gathered for the anti-war demonstration, which started at about 8 pm.

About 20 police officers were there, as well.

Just after 9 pm, missile warning sirens sounded. Both the police officers and demonstrators ran toward bomb shelters, while the right wing thugs followed.

But instead of running for shelter, they threatened the leftists and assaulted as many of them as they could, reportedly using clubs to beat their unarmed opponents as police were seeking shelter at the Habima Theater nearby.

In what has become typical for Israel’s police force, police at the scene reportedly told Ha’aretz that no one was arrested, no injuries were reported, and that the situation was "under control."

Eyewitnesses say police did not do much to stop the violence, and did not attempt to arrest the right wing thugs.

Israeli rapper Yoav Eliasi, who goes by the stage-name "The Shade," was there with the right wing thugs and reportedly thanked them for their hooliganism after the beating was over, giving a special nod to the Beitar Jerusalem FC fan club of soccer hooligans who were among the right wing thugs there.

"Together we're a force against the real enemy among us, the radical left, and thanks to my guys who are apparently called the lions, and thanks to the IDF, all this is for you!" Eliasi reportedly wrote.