Reform Rabbi Named To Be US Ambassador For International Religious Freedom 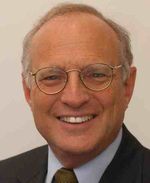 Reform Rabbi David Saperstein, who has headed the Reform Movement’s political arm, the Religious Action Center, since 1974, has been named the US Ambassador for International Religious Freedom.

“I am grateful that Rabbi Saperstein has chosen to dedicate his talent to serving the American people at this important time for our country. I look forward to working with him in the months and years ahead,” Obama said in a formal statement.

Besides his longtime work with the Reform Movement Saperstein also serves as an adjunct professor of First Amendment church-state law and of Jewish law at Georgetown University in Washington, DC.

Saperstein reportedly delivered the invocation at the concluding session of the 2008 Democratic Convention, the convention that first nominated Obama for president.

Although Israel is a democracy that, on paper, respects religious freedom, it has been remarkably lax at preventing and prosecuting Jewish hate crimes, including against Christian and Muslim shrines and communities – so lax that the US State Department reprimanded Israel for it in a report issued in March.

Israel has failed to prosecute arson and racist graffiti attacks on mosques and churches and the haredi spitting attacks on Christian clergy which are common in Jerusalem’s Old City.

Even when security camera footage of the attackers is available, Israel police rarely make arrests and, when they do, the accused are often later quietly released from custody and any charges against them dropped.

According to Israel’s internal security service known as the Shin Bet or the Shabak, a majority of the price tag hate crime attacks can be traced to students and followers of extremist Chabad Rabb Yitchak Ginsburgh who founded and leads the Od Yosef Chai Yeshiva in the most radical West Bank Jewish settlement, Yitzhar.

Even so, no arrests have been made, other than of six Jews who were accused of murdering 16-year-old Mohammed Abu Khbeir in Jerusalem early this month.

Three of those arrested were released to house arrest, reportedly because while they were part of the cell that murdered the Abu Khbeir, they did not actively participate in his murder.

The other three – a 30-year-old adult who allegedly has a history of mental illness but who nonetheless owned and operated his own retail business, and two 16-year-olds, at least one of whom is a haredi yeshiva student – have been indicted.

The arrests were made after Abu Khbeir’s kidnapping and gruesome murder – he was burned alive after being beaten – caused a furor internationally and among Israeli moderates, Israeli Arabs and Palestinians in the West Bank and Gaza.

Reform Rabbi Named To Be US Ambassador For International Religious Freedom