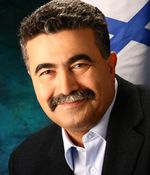 A plethora of calls to murder Israel’s Minister of Environmental Protection Amir Peretz and his family were posted on Facebook by Israeli rightists after Peretz posted a note about his visit to the mourning tent of the Abu Khbeir family in East Jerusalem.

A plethora of calls to murder Israel’s Minister of Environmental Protection Amir Peretz and his family were posted on Facebook by Israeli rightists after Peretz posted a note about his visit to the mourning tent of the Abu Khbeir family in East Jerusalem, Ha’aretz reported. The Abu Khbeir's 16-year-old son Mohammed was kidnapped and burned alive by right wing Jewish extremists last week as a revenge killing for the kidnapping and murder of three Israeli teens on the West bank last month by Hamas terrorists.

Six Jews were arrested for that murder. Three have been released to house arrest because, while they belonged to that terror cell and may have even discussed revenge murders with the others, they allegedly played no “active” role in the actually kidnapping and murder.

The other three have reportedly confessed.

The threats against Peretz were reported to police and Israel’s internal security service, commonly known as the Shin Bet.

Even though some of the comments clearly violate Israeli law and the commenters can be identified, no arrests have yet been made.

Peretz of the small Hatnuah Party is the only government minister to pay a condolence call in person to the Abu Khbir family, largely because the Shin Bet has asked ministers not to go because of the danger involved of entering an Arab neighborhood where residents are very angry at the government and the state.

After his visit, Peretz wrote about his opposition to Jewish extremism and called the murderers “beasts in human form.”

“Today I went to the mourners’ tent of the family of Mohammed Abu Khdeir in Shoafat. I expressed my condolences and said that price tag gangs, which lead to incitement and extremist acts, must be dealt with at any price. I added that the perpetrators of this murder, who are beasts in human form, must be dealt with as terrorists and by using all the means taken against terrorists, and that the demolition of their homes must be considered,” Peretz reportedly wrote.

Most people who posted comments supported Peretz. But dozens of those who did not were often violent.


“Amir Peretz, you bastard, I hope that your children, your family, will be murdered,” Amit Sharon reportedly wrote.

“Get out of the Knesset. I hope you are slaughtered, you stupid leftist,” another poster, Tal Kimhi, reportedly wrote.

“They did a good thing. If only all Jews would do something like that — for every Jew murdered, a Jew should murder an Arab. Then they will feel it even though they don’t care. Those who killed the Arab — I am proud of them. Good job!,” commenters Natalie and Avishai Emek reportedly added.

“Don’t worry! God will put you on his black list too, you filth! Ariel Sharon, Yitzhak Rabin and the rest have been punished already.... You will be punished too!,” commenter Avi Mizrahi wrote, referring to assassinated former Prime Minister Yitzhak Rabin and to former Prime Minister Ariel Sharon, who suffered a massive stroke not long after making concessions to Palestinians, including unilaterally withdrawing Israel from Gaza, and who never regained consciousness.

“We are the second generation of Holocaust survivors, and for us the combination of the murder and the burning is particularly horrific. Anyone who ignores the burning of mosques and churches should not be surprised when human beings are burned as well,” Dr. Gadi Gvaryahu, one of the group’s leaders, told Ha’aretz.

A plethora of calls to murder Israel’s Minister of Environmental Protection Amir Peretz and his family were posted on Facebook by Israeli rightists after Peretz posted a note about his visit to the mourning tent of the Abu Khbeir family in East Jerusalem.