Holocaust: The Satmar Rebbe Knew About Mass Murder Of Polish Jews In 1943, Did Not Tell Followers To Flee, Resist Or Hide 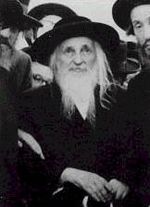 Menachem Keren-Kratz, a researcher on Hungarian Jewry and the Holocaust, has written a long article on the mostly bad role the first Satmar Rebbe, Rabbi Joel "Yoelish" Teitelbaum, played during the Holocaust.

Tablet Magazine has a long article, the first of two, by Menachem Keren-Kratz, a researcher on Hungarian Jewry and the Holocaust, on the role the first Satmar Rebbe, Rabbi Joel "Yoelish" Teitelbaum played during the Holocaust.

Keren-Kratz says that Yoelish knew about he mass murder of Polish Jewry in 1943 but did not warn his followers to try to flee or to go into hiding.

Yoelish also refused to work with Hungarian Zionists, who actually managed to rescue thousands of Jews before the Nazis took over Hungary.

Yoelish also tried several times to save himself and his close entourage, and once early in the war even fled to safety in Czechoslovakia and then returned to Transylvania three months later when the danger passed. Each attempt to save himself was selfish – no serious attempts were made by Yoelish to try to save his followers.

While this was going on, Keren-Kratz writes, many other area haredi rabbis refused to leave their followers even when offered visas or other ways to escape on their own. Some of those were relatives of Yoelish, who himself displayed relatively little concern for his followers.

Yoelish also opposed the formation of Jewish defense brigades or any organized resistance to local anti-Semites before the Nazi takeover.

But there were times when Yoelish turned down offers of rescue because they came from Zionists or were to carried out through Zionists, Kern Kratz claims.

Yoelish also refused to work with Agudath Israel, which he considerd to be too modern and too tolerant of Zionism, and only changed his mind to some extent after he was finally rescued. And that rescue came on the train to safety organized by Zionist Rudolf Kasztner, who bargained for the train directly with Adolph Eichmann, the most feared Nazi on earth.

After the war, many surviving rabbis and rebbes went back to their home cities in Transylvania and surrouning areas because many survivors were returning to live there. Yoelish, however, did not go back to minister to those survivors. Instead, he briefly continued to live in Switzerland and then went to Jerusalem, where his attempt to set up a hasidic court ended in failure, causing him to resettle in New York.

(I was told years ago that Yoelish could not go back to live in Satmar or the area around it because there were too many local survivors there who wanted to kill him.)

There are issues with Keren-Kratz's article that are had to address because he doesn't cite any sources at all and doesn't even mention any specific sources by name – something that is unforgivable in article of this nature.

I emailed the Tablet editor in charge of the piece very early this morning and asked for the sources to be inserted into the article. He hasn't yet returnmed my email.

Tomorrow's concluding Keren-Kratz article will apparently make the case that many Hungarian Jews unnecessarily died in the Holocaust because of Yoelish's bad behavior.

I just hope Keren-Kratz cites sources to support his claims so his work can rise above the level of an educated hit piece, which is essentially what it is now.

Holocaust: The Satmar Rebbe Knew About Mass Murder Of Polish Jews In 1943, Did Not Tell Followers To Flee, Resist Or Hide

Menachem Keren-Kratz, a researcher on Hungarian Jewry and the Holocaust, has written a long article on the mostly bad role the first Satmar Rebbe, Rabbi Joel "Yoelish" Teitelbaum, played during the Holocaust.