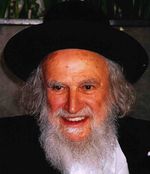 HaPeles, the mouthpiece newspaper of the non-hasidic Ashkenazi haredi rebel faction led by Rabbi Shmuel Auerbach, ordered haredim not to attend the Home Front Command's war education sessions held specifically for haredim in haredi neighborhoods of Jerusalem. Why? The sessions are all allegedly an evil IDF-government plot.

As IDF soldiers fight – and all too often die – in Gaza, haredim continue to fight against the IDF at home, Ynet reported.

Why should haredim not learn what to do when missile defense sirens sound?

Because, HaPeles reportedly claims, those sessions are sometimes taught by some of the handful of haredim actually serving in the IDF, and by having these haredim teach the sessions, the IDF is trying to show rank-and-file haredim that some haredim do serve in the IDF. And that might trick haredim into reducing their rabbi-ordered opposition to the new IDF draft law that, on paper at least, will draft haredi yeshiva students into Israel’s military.

Haredi soldiers began appearing at local schools and synagogues to teach these information sessions, even offering separate sessions for each gender to conform to extreme haredi modesty concerns.

Information on what to do when missile warning sirens sound has already been printed in haredi papers, Auerbach’s faction insisted, and there is no need for further instruction.

Auerbach was quoted as saying that he feared young haredi men would be tempted to join the IDF by seeing these haredi soldiers looking heroic, holding positions of authority, teaching them and their parents and families.

"They won't bring a secular soldier, because the entire purpose of the gathering is to show that things are not so bad and that there are haredim who have become soldiers and now have the honor of lecturing in front of yeshiva students," HaPeles reported wrote.

Hospital officials reportedly responded that before asking the students to volunteer, they had asked rabbis who ruled that it was permissible because it is taking part in as saving lives, and is therefore a mitzvah.

Almost no haredim serve in the IDF and the minuscule number said to be serving in Gaza are a only a tiny percentage of what the number should be proportionate to the haredi population of Israel.

Haredi rabbinic leaders from all factions have ascribed Israel’s relative safety from thousands of Hamas rockets and missiles to various magic formulations based on God’s protection of the Land of Israel and the Jewish people, but have refused to acknowledge or thank the IDF, IDF soldiers, the Iron Dome missile defense system, the scientists who developed it and who help run it, or the US, which paid for it.

“Everything is really all from God,” one haredi rabbi recently said, going on to say that putting any trust in the Iron Dome or even praising it was a form of “idol worship.”

Almost no haredi rabbis have asked their followers to pray for the IDF’s success or for IDF soldiers.

HaPeles, the mouthpiece newspaper of the non-hasidic Ashkenazi haredi rebel faction led by Rabbi Shmuel Auerbach, ordered haredim not to attend the Home Front Command's war education sessions held specifically for haredim in haredi neighborhoods of Jerusalem. Why? The sessions are all allegedly an evil IDF-government plot.