"AS WAR RAGES IN THE HOLY LAND. JEWS AROUND THE WORLD SAY TEHILIM. IS THERE ANYTHING ELSE WE CAN DO TO HELP OUR BROTHERS IN THEIR TIME OF NEED? A GROUP OF WOMEN IN CROWN HEIGHTS SAY YES." 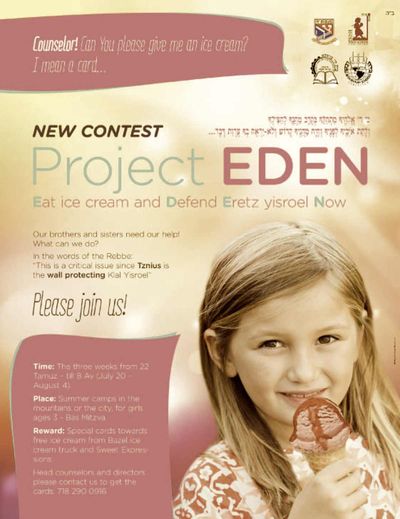 AS WAR RAGES IN THE HOLY LAND. JEWS AROUND THE WORLD SAY TEHILIM. IS THERE ANYTHING ELSE WE CAN DO TO HELP OUR BROTHERS IN THEIR TIME OF NEED?

A GROUP OF WOMEN IN CROWN HEIGHTS SAY YES.

Inspired by talks of the Rebbe on how Jews around the world can influence the safety of the Yidden in Eretz Yisrael, PROJECT EDEN was born. And YOU can join, too!

PROJECT EDEN has a three-pronged effect: Firstly, it involves KIDS, Tinokos Shel Bais Rabban, our guarantors whom we turn to in times of trouble (think: 22 thousand children in the times of Mordechai and Esther). It’s all about ACHDUS – One nation, united, wherever we may be, giving of ourselves to help Israel. Thirdly, it’s about TZNIUS- our sure-fire protection.

HERE’S HOW IT WORKS:
Starting Sunday, 22 Tammuz (July 20) until Monday, 8 Av (August 4), Every girl who comes to day camp dressed in Tznius attire (i.e. clothing which keep necklines, elbows, knees and feet covered at all times) will receive an EDEN card. Eight such cards entitle a girl to a free ice cream at Sweet Expressions or the Ice Cream truck. All cards will be entered into a raffle for a $100 gift certificate at Sweet Expressions or Hamafitz Judaica.

The drawing will IY”H be held on 18 Elul, the winners being announced on COLlive.

So, your kids will Eat ice cream, while helping Defend Eretz Yisrael Now – EDEN for short. What can be better than that? Taam Gan Eden!

AND HERE’S WHAT YOU CAN DO:
UNITE to make a difference! Aside from encouraging all those happy campers to take part in this exciting contest, you can help this project reach as many camps as possible!

You can sponsor a child, a bunk, or any amount! Please e-mail tzniuscontest@gmail.com or call 718-290-0916 TODAY, so we can set to work setting up this project, ASAP. TIME IS SHORT! ACT NOW.

The late Chaabd-Lubavitch Rebbe Rabbi Menachem Mendel Schneerson spoke about the importance of tznius (modesty) to assure peace in Israel.

Schneerson says very clearly that bad things happen to Jews because God is not with them when "immodesty" is seen:

"…To achieve this [peace and security for the Land of Israel], the observance of Tznius [haredi modesty laws] is also necessary, as the Posuk [sentence from the Torah] says: “Hashem [God] is accompanying your camp” because “He will not see any immorality in you”. When Hashem sees that Yidden [Jews], wherever they are, are conducting themselves in a manner of Tznius [modesty]– He accompanies them “to save you and to place your enemies before you”, that they need not do anything, because Hashem saves them, and causes all the enemies to fall before the Yidden, till the enemies are transformed and make peace with the Yidden." (Likutei Sichos Vol. 8 P. 226)

“In the Haftora of Parshas Beshalach we read about Devora Haneviah [Deborah the Prophetess]: “She would sit under a palm tree” - in order to avoid Yichud [being alone with a male she is not married to or closely related to] (because the palm tree does not have branches extending down) – this teaches us the importance of Tznius [modesty], “The glory of the princess is within”. This is also stressed in Shiras Devora [the Song of Deborah from the Hebrew Bible]: “She should be blessed among women in the tent” - emphasizing the Tznius of the Imahos [matriarchs], which is the foundation of the Yidden’s existence.

This explains the conclusion of the Haftora: “The land had rest for forty years” – alluding that through the conduct of the righteous Yiddishe [Jewish] women in the way of Devora, we merit a state of tranquility, leading to the ultimate state of tranquility when we enter Eretz Yisroel [the Land of Israel] in the true and complete redemption.” (Sefer Hasichos 5752 Vol. 1 P. 305)

Shame this didn't work for the ChmielnickiI (Khmelnitski) pogroms, the pogroms during the Crusades, the Roman's slaughter of Jews in Jerusalem in 68 CE or again during the end of Bar Kokhba revolt. It didn't work for even the most strict Jewish communities in the Holocaust, either.

God is either an extreme prude whose demand for "modesty" can never be fulfilled by man, errrr, woman, or the system is set up for humans to fail and then suffer and die because some women are always "immodest."

Or, perhaps, there is no system at all, and all of this modesty pushed by haredi rabbis like Schneerson is, well, BS. Because we all know seeing the knee of a 6-year-old girl makes those Hamas missile fly, right?

"AS WAR RAGES IN THE HOLY LAND. JEWS AROUND THE WORLD SAY TEHILIM. IS THERE ANYTHING ELSE WE CAN DO TO HELP OUR BROTHERS IN THEIR TIME OF NEED? A GROUP OF WOMEN IN CROWN HEIGHTS SAY YES."