Two 16-year-olds were hitchhiking home from their West Bank yeshiva when they disappeared along with another teen and are presumed kidnapped by terrorists. 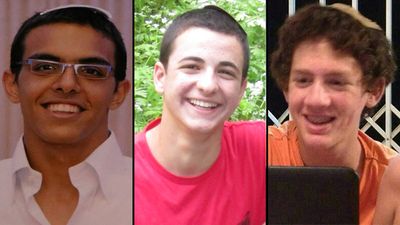 Above from left: Eyal Yifrah, Gil-Ad Shayer and the American Naftali Frenkel

Israel Police waited almost five hours before starting to search for three teen boys – one an American citizen – now believed to have been kidnapped by Arab terrorists in the West Bank Thursday, Ynet reported.

On Thursday at 10:25 pm, about the time the apparent kidnapping took place, police received reports the teens were missing and likely kidnapped.

But police did not even begin searching for the teens – and did not notify the IDF or Israel’s internal security force, the Shin Bet – until the father of one of the boys showed up at a police station at 3:00 am Friday and pleaded with police to find his son and the other boys.

Missing and presumed to be held captive by terrorists are sixteen-year-olds Gil-Ad Shayer and Naftali Frenkel (the American citizen) and 19-year-old Eyal Yifrah. The 16-year-olds were apparently hitchhiking home from Rabbi Adin Steinsaltz’s Mekor Chaim Yeshiva when they were kidnapped along with Yifrah.

But it wasn’t until Gil-Ad's father went to the police station at approximately 3:00 AM and also called the father of one of the other missing boys that police finally realized the reports of the boys’ kidnapping were real.

The West Bank division of the Israel Police reportedly declined to comment on the delay.

"There are many details related to the investigation into the kidnapping. At present, we are not confirming or denying any details of the investigation, and are focusing on the massive effort underway together with the IDF and Shin Bet [to locate and rescue the boys],” police told Ynet.

Rabbi David Rabinowitz, deputy head of the Mekor Chaim Yeshiva, said the yeshiva staff knew that something was wrong that night.

"We realized that they were missing during the night. The parents called and said that they should have come home and they hadn’t. We began making phone calls [and] at five in the morning realization dawned. There were other signs, we realized that something had happened and we started to worry a lot more, and slowly a clear picture began to emerge. Gil-Ad and Naftali had left at around ten - they decided to leave early and they spoke to their parents. The rest of the class left on Friday,” Rabinowitz reportedly said.

Why the yeshiva allowed two 16-year-old boys to hitchhike home alone from the West Bank at night is not clear.

However, these types of child safety issues often appear to be treated lightly in Orthodox right wing and other nationalist circles.

Two 16-year-olds were hitchhiking home from their West Bank yeshiva when they disappeared along with another teen and are presumed kidnapped by terrorists.