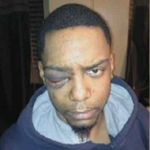 Taj Patterson, who was allegedly savagely beaten by a gang of Satmar hasidim associated with the Shomrim street patrol last December, is now suing some of those hasidim and Shomrim.

Above: Taj Patterson after the alleged assault took place

Early in the morning of December 1, Taj Patterson – a 22-year-old gay black man – was walking home in Brooklyn when he had the misfortune of passing through the Jewish section of Williamsburg.

Patterson was reportedly jumped by a gang 15 to 20 of hasidic men allegedly affiliated with the Shomrim street patrol. The hasidim allegedly savagely beat Patterson, breaking his eye socket, tearing a retina and causing other damage, including bruising and cuts.

But despite identification of the assailants by several eyewitnesses as hasidic Jews wearing what appeared to be Shomrim patrol jackets and photos taken of the assault, the NYPD made no arrests and the case appeared to be stagnant. When FailedMessiah.com contacted the NYPD in March to check on the status of the case, the NYPD’s spokesperson claimed to have never hear of the attack and to know nothing about it – despite the fact that it had been reported in the Daily News and on FailedMessiah.com, along with in other media, in the previous months.

In April, FailedMessiah.com learned that Shomrim had allegedly destroyed security camera footage in a several block radius of the attack within hours after Patterson was beaten in order to hinder any NYPD investigation.

On April 23, five Satmar hasidim were arrested and charged with gang assault in the beating.

To date, there has been no explanation from police or from the Brooklyn DA on why the other 10 to 15 hasidim allegedly involved in the assault were not arrested and charged.

And even though the hasidim allegedly used anti-gay slurs when beating Patterson, the gang was not charged with a hate crime.

Now the Daily News reports that Patterson is suing the five arrested men for damages and Shomrim for negligence.

“There’s more to this than meets the eye,” George Farkas, an attorney for one of the arrested Shomrim members, cryptically said.

Posted at 10:47 AM in Bigotry & Racism, Crime, Litigation, etc., Haredim, Homophobia and its Discontents | Permalink

Taj Patterson, who was allegedly savagely beaten by a gang of Satmar hasidim associated with the Shomrim street patrol last December, is now suing some of those hasidim and Shomrim.