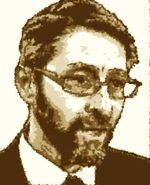 The leaders of the umbrella organization of the Jewish community of France, the Consistoire, elected the country’s new Orthodox chief rabbi today.

The leaders of the umbrella organization of the Jewish community of France, the Consistoire, elected the country’s new Orthodox chief rabbi today, the AFP, La Croix and other French media reported.

Rabbi Haim Korsia, the French army’s Jewish chaplain, was elected to a seven-year term today on a 131-97 vote.

Korsia, who is 51-years-old, defeated one of the country’s two interim chief rabbis, Olivier Kaufmann.

Korsia is a student of former Chief Rabbi Gilles Bernheim, who resigned as chief rabbi in April 2013 due to a plagiarism scandal. Bernheim admitted repeatedly plagiarizing a noted philosopher’s work. He also admitted to claiming academic titles he had not actually earned and did not have.

Kaufmann’s co-interim chief rabbi, Michael Guggenheim, is currently enmeshed in a Jewish divorce extortion and money laundering scandal in which he and several other rabbis – including senior French Chabad rabbis – allegedly extorted tens of thousands of dollars from a woman’s family in order to facilitate a get (Jewish religious divorce) from her husband. At the rabbis’ suggestion, the husband’s bribe money was allegedly laundered through a Chabad school’s nonprofit bank account, with the family ‘donating’ more than $100,000 dollars and taking a large tax deduction for doing so while $30,000 was allegedly given by the Chabad school to the woman’s husband in return for the divorce. But unbeknownst to the rabbis, the family taped their alleged extortion and released portions of it to French media.

The extortion scandal could not have come at worse time for the French Jewish community, which is suffering through a wave of anti-Semitic attacks unprecedented since the end of WW2 and the Holocaust.

The leaders of the umbrella organization of the Jewish community of France, the Consistoire, elected the country’s new Orthodox chief rabbi today.