“It could be claimed that Daas Torah was adopted in order to ensure that the chassidic world would join and strengthen Agudas Yisrael. But it is also argued that the concept of Daas Torah had to be developed in order to justify the very existence of Agudas Yisrael, which was a modern political structure, and, perhaps more importantly, to render it superior to other Jewish organizations—in particular, Zionism and Mizrahi.…" 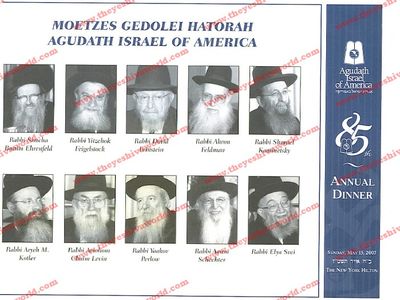 Rabbi Natan Slifkin writes that the haredi concept of Daas Torah – the near-infallibility of haredi rabbis and the extension of their new found absolute authority into secular areas of life Judaism used to give to experts in those secular fields – has just turned 100 years old.

Slifkin notes the granting of this extension into secular life of senior haredi rabbis’ unquestioned authority is given in “inverse proportion to their experience with worldly affairs - i.e. the more that the person [rabbi] has been isolated from the world, the more he is said to reflect a pure Torah perspective.”

Slifkin also makes another key point. Classical pre-Daas Torah rabbinic authority was expressed in teshuvot (responsa). The rules shu”t (sha’alot [questions] and teshuvot [rabbinic answers, responsa]) literature essentially required that rabbis submit their teshuvot to two or more other rabbis for evaluation before issuing them. They also required rabbis to cite their sources and to explain their reasoning.

That meant their positions could be rationally be evaluated, and other rabbis and Jews could determine whether or not they should be followed. (The person asking the question, however, generally speaking had to follow the answer he was given.)

But, Slifkin writes, “modern Daas Torah is usually presented with no rigorous explanation or justification. Indeed, the very concept of presenting of providing a rationale for its verdicts is often argued to be inappropriate.”

In other words, now haredi rabbis say do A or don’t do B. They often don’t cite sources or give a clear accounting of their reasoning, and they almost never submit their rulings to other rabbis for assessment before issuing them.

Before the hasidic movement took hold in the late 18th century, rabbis generally exerted control over their own geographic communities only. But, Slifkin points out, modern haredi Daas Torah also seeks to extend the authority of senior haredi rabbis beyond their geographic communities to the entire Jewish people, wherever they may live.

Slifkin believes Daas Torah was first informally introduced by hasidim in the late 19th century to “reaffirm rabbinic authority in light of the modern challenge of individual autonomy.”

I would argue that the purported infallibility of hasidic rebbes and their status in the eyes of their followers as kings almost on par with David and Solomon predates Slifkin’s mark by almost 100 years. These rebbes exerted almost complete control over the lives of their hasidim, even if the particular hasid lived many miles away from the seat of his rebbe’s court.

Hasidim across Eastern Europe set up their own synagogues or their own study halls which acted as informal synagogues against the will of local rabbis and Jewish community boards.

So you could walk into the village of Yechupitz and find the official synagogue with its rabbi, beit din, shochet, cantor and study hall and then find a small,often dingy hasidic kloiz where hasidim prayed, studied and gathered over the objections of the town’s rabbis and Jewish leaders.

These hasidim often did not answer to the local rabbi or rely on him for halakhic (Jewish legal) rulings.

Instead, they waited for their next visit to their far away rebbe and asked their legal or spiritual questions then, or wrote letters to their rebbe’s or to the rebbe’s designated posek (rabbinic decisor) and waited for the mail to bring them the answer. The local rabbi had essentially become superfluous to them.

Some hasidic groups, most notoriously Talne, a branch of the Chernobyl dynasty headed by the first Skvere Rebbe’s brother, launched actual campaigns to take over towns where some of their hasidim (but not the rebbe) lived, to extend their rebbe’s physical domain and his spiritual reach. They used extortion, bribery and trickery to try to force local Jewish communities to replace their own rabbi, shochet and cantor with members of the outside hasidic group – unless the local rabbi, shochet and cantor publicly pledged their allegiance to the outside hasidic group’s rebbe.

In Talne’s case, some of those campaigns were violent, and it was not unusual for recalcitrant rabbis, shochets, cantors and Jewish community officials to be beaten up by mobs of visiting Talne hasidim.

(This led to a decree from the government forbidding hasidic rabbis from traveling and from they or their hasidim holding military style marches to other towns.)

These were literal physical battles launched to extend what we now call the “Daas Torah” of these hasidic rebbes.

But whether the hasidic version of Daas Torah started in the late 1700s or almost 100 years later as Slifkin claims, the date it became the official policy of the non-hasidic haredi community appears to be June 19th, 1914 – 100 years ago yesterday.

As Slifkin explains, “this is the day that Agudas Yisrael, then in the process of being formed, published certain resolutions that had been adopted.

“The manifesto shows that Agudas Yisrael accepted two proposals insisted upon by the Hasidic rebbes as a precondition to joining the organization. One was that the verdicts of the Torah sages would be given without having to provide any justifications. Another was a considerable extension of the authority of the Council of Sages as against the lay leadership, to go beyond halachic questions.

“It could be claimed that Daas Torah was adopted in order to ensure that the chassidic world would join and strengthen Agudas Yisrael. But it is also argued that the concept of Daas Torah had to be developed in order to justify the very existence of Agudas Yisrael, which was a modern political structure, and, perhaps more importantly, to render it superior to other Jewish organizations—in particular, Zionism and Mizrahi. Others suggest that the strengthening of the role of rabbis in non-Torah decisions at that time may have been a reaction to the Zionist approach of restricting rabbinic authority to laws of kashrut and similar such narrow provinces.”

If Slifkin is right – and I believe he likely is –  this is how Daas Torah, a throughly modern innovation, became the ‘ancient’ cornerstone of haredi Judaism.

Posted at 02:27 AM in Haredim, History, Religion, Religion & State | Permalink

“It could be claimed that Daas Torah was adopted in order to ensure that the chassidic world would join and strengthen Agudas Yisrael. But it is also argued that the concept of Daas Torah had to be developed in order to justify the very existence of Agudas Yisrael, which was a modern political structure, and, perhaps more importantly, to render it superior to other Jewish organizations—in particular, Zionism and Mizrahi.…"