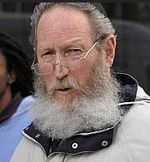 Dr. John Barry Myers, who has regularly prayed at Chabad's Yeshivah Centre in Melbourne, Australia for almost 25 years, allegedly groped and requested oral sex from a 68-year-old woman admitted to a hospital for depression and suicidal thoughts, an Australian tribunal has been told. Myers was recently given maftir at the Yeshivah Centre's main synagogue, a Melbourne source who was there when it happened told FailedMessiah.com.

A Victorian doctor [i.e., a doctor from the Australian provence of Victoria, where Melbourne is located] groped and requested oral sex from a 68-year-old woman admitted to a regional WA hospital for depression and suicidal thoughts, a tribunal has been told.

John Barry Myers is facing professional misconduct allegations brought to the State Administrative Tribunal by the Medical Board of Australia.

Dr Myers, who is suspended from practising, worked at Geraldton Regional Hospital as a locum physician for three months in 2012.

During that time he allegedly fondled the woman’s breast and bottom, hugged her, made advances for oral sex and came into her room after dark to kiss her on the cheek and say “goodnight sweetie”.

The woman, who cannot be named for legal reasons, this week told the SAT hearing “with all of his past history he shouldn’t have even been near me”.

Dr Myers had four previous adverse findings against him through the Medical Board of Victoria and Victorian Civil and Administrative Tribunal from 2001 to 2013.

The 2013 finding resulted in the cancellation of registration for a year.

The previous findings against him were not used in evidence this week. But he was asked why he did not tell the WA Country Health Service about a 2001 disciplinary act­ion involving an indecent ass­ault conviction when he applied for the locum role.

Dr Myers represented himself during this week’s hearing. He was not allowed to ask questions directly while the pat­ient gave evidence via video link because his voice was too distressing for her.

The woman said she even asked nurses if Dr Myers was really a doctor because she could not believe how he behaved.

“A real doctor wouldn’t sit there and ask me to suck his private parts,” she said.

Dr Myers argued he did not fondle or make advances, accusing her of being manipulative to get attention from her family.

He said he had only given advice, telling her to “suck his (her husband’s) c--k and put it between your breasts”.

The tribunal heard Dr Myers was not the now-70-year-old’s treating doctor at the time and only needed to monitor her physical progress.

He admitted seeing her three or four times a day, often alone in her room, during her stay in hospital, but it was recorded in hospital notes that he saw her only twice with an intern doctor. The patient’s psychiatrist and mental health case officer told the SAT the woman had never presented to them as manipulative and her ordeal had put her under great stress.

The SAT is yet to reach a verdict.

● 2001 Medical Practitioners Board of Victoria made a finding of unprofessional conduct against Dr Myers following a 2000 guilty plea to indecent assault in a Melbourne magistrate’s court. Dr Myers admitted to touching a car sales woman’s chest during a sale negotiation.

● 2004 Again found to be unprofessional in treating a couple aged in their 80s between March 2000 and June 2001. Dr Myers was found to have failed to give medical assistance, let the wife to stop taking prescribed medication, improperly discharged her from a hospital, did not treat her husband for dementia, imposed his views on their living arrangements and created a destructive relationship between the couple and their children.

● 2012 Dr Myers was found to have done “unprofessional conduct of a serious nature” in his treatment of an elderly woman between December 2006 and February 2007. He was hired to assess the 79-year-old’s mental capacity to instruct lawyers after she was put on an involuntary treatment order. Their relationship changed from a legal one to a doctor/patient one without proper consent or discussion of billing. He then went on to try and charge the woman more than $7000.

● October 2013 His registration is cancelled for one year after being hit with a unprofessional conduct finding for forming a close relationship with a patient who became “infatuated” with him from 1999 to 2008.

Dr. John Barry Myers, who has regularly prayed at Chabad's Yeshivah Centre in Melbourne, Australia for almost 25 years, allegedly groped and requested oral sex from a 68-year-old woman admitted to a hospital for depression and suicidal thoughts, an Australian tribunal has been told. Myers was recently given maftir at the Yeshivah Centre's main synagogue, a Melbourne source who was there when it happened told FailedMessiah.com.