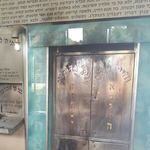 A trailer near Baqa al-Gharbiyye used as a Chabad synagogue and a synagogue in Petach Tikva were set on fire Saturday morning in what may be retaliation for price tag hate crimes.

Above: The torched ark in Petach Tikva

A trailer used as a Chabad synagogue was set on fire Saturday morning near Baqa al-Gharbiyye, Ynet reported.

Fire investigators have not yet officially announced if the fire was arson and, if so, how it was started.

Meanwhile, in Petah Tikva parochet covering a metal and ark in a synagogue was set on fire in a definite arson.

They were doused with flammable liquid and set it on fire. Firefighters responded and extinguished the fire. The Torah scrolls inside the ark were only lightly damaged due the metal doors.

Police are investigating the possibility that both fires are related. They are also unsure whether the motivation for either fire is nationalistic or criminal.

Perhaps more significantly, police are investigating whether the fires were set in response to a wave of "price tag" hate crimes committed against Christian churches; mosques; Arab-owned vehicles, orchards and homes; and a non-Orthodox synagogue belonging to the Conservative Movement.  The hate crimes were allegedly carried out by Jewish settlers linked to extremist racist Chabad Rabbi Yitzchak Ginsburg, who has become the spiritual and rabbinic replacement for the late extremist Rabbi Meir Kahane.

While the American-born Ginsburg holds no official position inside the Chabad movement, he is one of the most popular Chabad rabbis in Israel – especially (but notfar from exclusively) among anglos, ba’al teshuvas and messianists.

A trailer near Baqa al-Gharbiyye used as a Chabad synagogue and a synagogue in Petach Tikva were set on fire Saturday morning in what may be retaliation for price tag hate crimes.