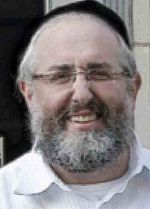 During his plea Tuesday before U.S. District Judge Freda L. Wolfson, David Wax implicated Mendel Epstein, a Brooklyn rabbi who has a home in Lakewood, along with several other men who were charged last fall in a similar conspiracy.…

Wax told the court that in October 2010, he and Epstein agreed to force [Yisrael Meir] Briskman to give Briskman’s wife a “get,” which is a document needed in Jewish law, so that an Orthodox woman would be able to remarry without religious consequences. Wax told the court Epstein had arranged for a forced get for Wax’s sister in the 1980s.…

The wife’s family seeking the religious document paid Wax approximately $100,000 for the agreement. Wax told the court that Mendel Epstein got $50,000. Wax also told the court that on the drive back to New York with Briskman, he tried to extort another $50,000 from Briskman’s father.…

The Wax case ultimately led to charges against Epstein, Wolmark and eight New York men, accused of being involved in more plots to kidnap and torture other Orthodox Jewish husbands to force them to grant their wives religious divorces.…

Wax is facing as much as life in prison.

Epstein, Wolmark and Goldstein are awaiting trial in a separate kidnapping-torture-forced get conspiracy.