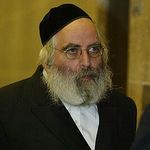 What happened with the sweetheart plea deal given to Rabbi Baruch Lebovits today in a Brooklyn court?

In part the deal was given because of another sweetheart plea deal handed out earlier this week by a new Brooklyn DA many anti-abuse activists now consider to be corrupt.

In court today, Lebovits admitted to having oral sex with a teenage boy on eight different occasions from 2004 and 2005.

Today, prosecutors offered Lebovits a deal with a sentence of two to six years in prison.

Lebovits' attorneys pointed out that earlier this week, Thompson gave hasid Yoel Malik a plea deal that will see him serve at most 60 days in city jail for having sex with a 13-year-old boy in a hotel room.

The judge, Mark Dwyer, then told the attorneys that he would only give Lebovits a two-year prison sentence because that was the average sentence, he claimed, for offenders who admitted to the same crime.

With credit for 13 months previously served and time off for good behavior, Lebovits will only serve about three months in a city jail.

“The DA has been ready and willing to proceed to trial, but he understands he has to balance the needs of justice with what would be best for the complainant,” the lead prosecutor on the case, Anna-Sigga Nicolazzi said in court.

Lebovits’ victim was allegedly promised close to $1 million dollars not to testify against Lebovits in the new trial.

Despite that and other clear evidence of witness tampering by supporters of Lebovits in this case and in the related case of Sam Kellner – who was charged with extorting the Lebovits family based on evidence that turned out to be tainted, perjured and simply false, and which came from the Lebovits family itself – Brooklyn DA Ken Thompson has not attempted to prosecute the individuals who did that alleged tampering (although he did drop the charges against Kellner).

That, the deal Thompson gave Malik earlier this week, and what many consider to be his office's deplorable conduct in the Lebovits case has enraged many victims’ advocates who now view Thompson as corrupt – in their minds, as corrupt as his predecessor Charles J. Hynes.