Brooklyn Borough President Eric Adams was supposed to receive a community service award from Chabad's Oholei Torah school in Crown Heights last night. The school was founded by Chabad's late Rebbe Rabbi Menchem Mendel Schneersohn 58 years ago. But Adams was apparently a no-show and Chabad news blogs have nothing posted on the dinner at all. Why?

Did Brooklyn’s Borough President Fail To Appear At A Chabad Fundraising Dinner Over School’s Failure To Teach Any Secular Subjects?
Shmarya Rosenberg • FailedMessiah.com

The boys school and yeshiva was founded by Chabad's late Rebbe Rabbi Menchem Mendel Schneersohn 58 years ago and is known in the Chabad community as the Rebbe's school.

But Adams was apparently a no-show, and Chabad news blogs have nothing posted on the dinner at all.

It appears that Adams listened and decided not to appear.

The former Oholei Torah stuident whose letter was the subject of a FailedMessiah.com post earlier this month said he was happy with Adams' apparent decision to be a no-show at the event.

"Eric Adams did the right thing by boycotting the Oheli Torah dinner. Hopefully this will send a message to the school that their flagrant violation of Federal, State and local educations laws will not be tolerated anymore. The Talmud is absolutely clear that the law of the land is binding on every Jew-Dina Dimalchusa Dina!

Despite the NY State Dept. of Education's willful indifference to the violations of Oheli Torah, Eric Adams took a small step in rectifying this most egregious behavior of Ohlei Torah," the former student told Failedmessiah.com.

Chaim Levin, another former Oholei Torah student who wrote about the school's deficient education in the Huffington Post last year, told FailedMessiah.com that Adams did the right thing.

"My educational background [at Oholei Torah was] comprised of no formal academic English, Math, science, history and basic social studies; attending private school within the Orthodox community of Crown Heights I went to school 6 days a week from around 8 to 4 then 5,6, and 7pm, including Sundays.

"In this school that I’ve previously written about in the Huffington Post, I received no formal educational training other than strict religious biblical studies. I never took a Regent['s exam], I was never taught how to properly write, and at least half of my teachers during grades 1 through 8 spoke exclusively Yiddish; not a single test or document that was given to us as students by the school was in English, only Yiddish and sometimes Hebrew. I realized that this school which openly and proudly defies federal and state core educational standards has hampered thousands of students like myself who feel like something so important to our growth was stolen from us without our consent.

"Until this very day I speak to so many former students both younger and older than me who sincerely believe that the trajectory of their life would’ve been different and possibly (or likely) easier, and filled with less worry and more career security. But a child who is taught exclusively studies in another language in America, in New York city, I can tell you firsthand that at 17 years old he will not know the words to our national anthem, I didn’t know what a constitution is or meant, and probably wouldn’t have been able to compose more than two coherent paragraphs in the English language without so many spelling mistakes, that would easily identify me as a victim of this corrupt and unjust and very excuse for education provided by Oholei Torah," Levin said.

At the same time Adams was being informed of Oholei Torah's educational policy, ex-Oholei Torah students and others were also contacting state and federal regulators, asking them to compel Ohoeli Torah and other similar haredi schools to teach basic secular subjects.

And that combination of events is likely why Chabad news blogs, always lighting quick to publicize Chabad events like the Oholei Torah dinner, have so far been completely silent about it. 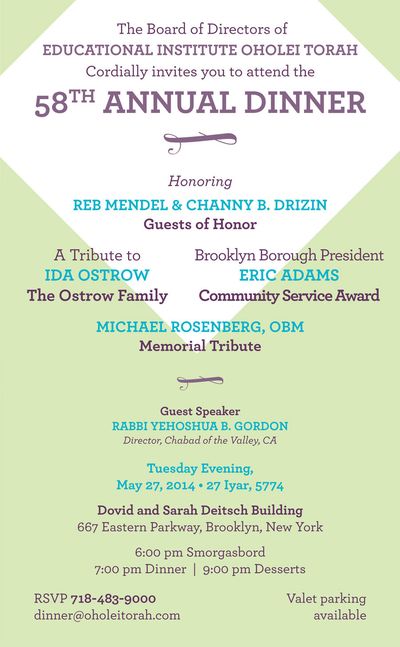 Should Eric Adams Accept An Honor From A Chabad School That Teaches No Secular Subjects?

Posted at 10:10 AM in Chabad, Crime, Litigation, etc., Haredim | Permalink

Brooklyn Borough President Eric Adams was supposed to receive a community service award from Chabad's Oholei Torah school in Crown Heights last night. The school was founded by Chabad's late Rebbe Rabbi Menchem Mendel Schneersohn 58 years ago. But Adams was apparently a no-show and Chabad news blogs have nothing posted on the dinner at all. Why?