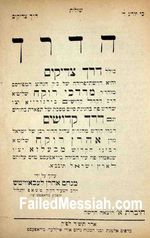 The Belzer Rebbe twice abandoned Jews during the Holocaust. The second time, in Budapest, was especially egegious. The Belzer Rebbe promised safety, goodness and tranquility to the Jews of Budapest and then fled the next day, leaving them to be murdered by the Nazis. Here is the Rebbe's uncensored speech as published then, published here for the first time.

Seventy years ago, the fourth Belzer Rebbe, Rabbi Aharon Rokeach, was in Budapest where he and his entourage had fled to from Poland to avoid being murdered by the Nazis.

But just two months before the beginning of the deportation of Hungary’s Jews to Auschwitz, Rokeach and his half-brother Mordechai fled again, this time from Budapest to Palestine with the help of Zionists.

But before they left, Mordechai read the Belzer Rebbe’s farewell address out loud to thousands of Hungarian Jews.

Aharon Rokeach promised those that they would be safe and would enjoy goodness and tranquility in Hungary – especially, the Belzer Rebbe inferred, if they gave him lots of tzedaka money to take with him to Palestine. "…The righteous rabbi perceives that residents of this city will live in peace and serenity…" (p.19).

And, the Belzer Rebbe said through his brother, he wasn't really fleeing. Instead, he was ascending, going up to a higher place – the Land of Israel, the Holy Land. But God, the Rebbe said, will protect you who remain here.

He also said that according to tradition there was no value to settling the Land of Israel before the messiah comes, so his stay in Palestine would only be temporary, and he would return to Budapest (p. 26).

The Jews gave him money and thought they would be safe. Rokeach and his entourage left for Palestine.

Less than two months later, the Jews the rebbe had promised safety, goodness and tranquility were suddenly under Nazi control and most were eventuallly murdered, many in Auschwitz.

Ten days later, on February 17, 1944, a censored edition of the booklet was published.

Almost a month after that, a third edition of the booklet was published. It was also censored and it is labeled "second publication, Adar 1944.”

On March 18, German tanks rolled into Hungary – which was already a German ally.

The Nazis installed a puppet government on March 23.

In May 1944, deportations to Auschwitz began.

The rebbe's promises to the Jews of Budapest were worthless.

Here in the following PDF file is a copy of the uncensored first edition of the booklet of the Rebbe's speech and an admission ticket to Rosh HaShana prayers with the Rebbe (a ticket that cost money to buy), so Jews never forget what the Belzer Rebbe and his brother did to them in the Holocaust: 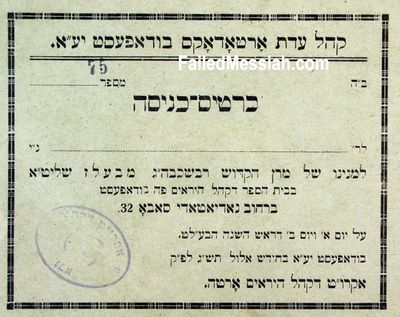 The entire booklet with the speech and ticket:

An English language summary of the speech can be read here.

The Belzer Rebbe And The Holocaust.

Belzer Rebbe: We Don't Need The State Or The Government.

The Belzer Rebbe ‘Forgets’ His Own Family’s Debt To Zionists.

Belz And The Holocaust.

Chabad And The Holocaust.

Elchonon Wasserman And The Holocaust.

Rabbi Avigdor Miller: Hitler Was A "Kindness From Heaven."

The Belzer Rebbe twice abandoned Jews during the Holocaust. The second time, in Budapest, was especially egegious. The Belzer Rebbe promised safety, goodness and tranquility to the Jews of Budapest and then fled the next day, leaving them to be murdered by the Nazis. Here is the Rebbe's uncensored speech as published then, published here for the first time.