Report: US Rep Michael Grimm Expected To Be Indicted 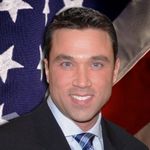 Federal prosecutors are preparing criminal charges against Rep. Michael Grimm (R-NY), capping a two-year FBI investigation that ranges from his business dealings to his first campaign for Congress in 2010. Some of the campaign crimes are possibly linked to Sefardi haredi Kabbalist Rabbi Yoshiyahu Yosef Pinto.

Federal prosecutors are preparing criminal charges against Rep. Michael Grimm, capping a two-year FBI investigation that ranges from his business dealings to his first campaign for Congress in 2010, U.S. officials briefed on the matter said.

In recent months, public attention has focused on the 44-year-old House member's campaign donations after a friend and donor was charged with funneling illegal contributions to Grimm's campaign four years ago.

The former FBI agent and two-term Republican lawmaker from New York made headlines when he was shown on camera threatening to throw a reporter over the Capitol Hill balcony after an interview following the State of the Union address in January.

A former Marine, Grimm represents the borough of Staten Island and parts of Brooklyn, and is a darling of tea party conservatives.

The U.S. attorney's office in Brooklyn declined to comment on the expectation charges could be filed as soon as next week.

An attorney for Grimm, William McGinley said in a statement to CNN that Grimm "asserts his innocence of any wrongdoing" and that "we are disappointed by the government's decision, but hardly surprised."

McGinley said the investigation has been plagued by malicious leaks, violations of grand jury secrecy, and strong-arm tactics," saying that from the beginning, the government has pursued a politically driven vendetta against Congressman Grimm and not an independent search for the truth."

He said Grimm would remain in office and would be vindicated.

Prosecutors from that office and the Justice Department's public integrity section in Washington have been reviewing details of the case against Grimm in recent weeks, and have decided to proceed with charges, the officials said.

Charges are expected to relate to Grimm's previous business dealings and alleged false statements he provided when questioned by the government about them. Precise details couldn't be learned.

Investigators have previously focused on Grimm's involvement with a former donor and ownership of a Manhattan restaurant, Healthalicious. The donor, Ofer Biton, has pleaded guilty to filing false documents in an investor visa application.

If prosecutors bring charges, they will have to do so without the help of a Grimm donor and friend, Donna Durand, who hasn't provided the testimony against the lawmaker that prosecutors sought, her lawyer said.

Attorney Stuart Kaplan said negotiations with the government have failed to produce a deal, and Kaplan now expects them to secure an indictment against Durand.

"The government made clear the door is open. They would like her to in and talk about Michael Grimm," said Kaplan, a former FBI colleague with Grimm. "She just doesn't have anything, she can't make it up."

Kaplan said Durand had a long-distance and strong friendship with Grimm and didn't intend to violate campaign finance laws when she organized and reimbursed donations beyond campaign-finance limits.

He said she was "not a sophisticated person" and had not been involved in campaign finance, and that any errors she made were because "she was trying to help someone she cared about."

The investigation into campaign finance is still ongoing.

Report: US Rep Michael Grimm Expected To Be Indicted

Federal prosecutors are preparing criminal charges against Rep. Michael Grimm (R-NY), capping a two-year FBI investigation that ranges from his business dealings to his first campaign for Congress in 2010. Some of the campaign crimes are possibly linked to Sefardi haredi Kabbalist Rabbi Yoshiyahu Yosef Pinto.