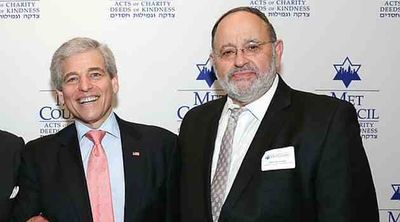 Rapfogel stole more than $7 million from the Metropolitan Council on Jewish Poverty before he was fired in August.

He was the Met Council’s CEO and president of its board from 1992 until August.

He and a gang of co-conspirators – including haredi Rabbi David Cohen, also a former Met Council CEO and an on-staff consultant at the anti-povery agency until his role in the scandal was revealed last year– stole at least $7 million from the anti-poverty nonprofit. They used a small portion of the stolen money to support New York politicians they sought to influence and kept the rest – millions of dollars – for themselves.

Cohen – who also was the CEO of Chevra Hatzolah, the haredi volunteer ambulance service, until he resigned in September of last year due to his role in the Met Council thefts –  pleaded guilty to felony charges today.

Rapfogel’s plea deal with the New York State Attorney General's Office saw him plead guilty to grand larceny, 2nd degree money laundering, 3rd degree tax fraud, and 1st degree offering a false instrument for filing. The deal reportedly calls for him serve only 3 1/3- to 10-years in prison and pay about $3 million in restitution.

All of that $3 million is being raised from Rapfogel’s friends in New York’s Modern Orthodox community. Last week Failedmessiah.com reported that $1.7 million of that amount had already been raised.

As FailedMessiah.com was the first to report, the Metropolitan Council on Jewish Poverty has fired at least five key mid-level staffers over the past several weeks due to the inability to pay their salaries and, despite claims to the contrary, cut back its Passover food programs and other services in the aftermath of Rapfogel’s thefts’ exposure.

The nonprofit’s board – many members of which are among the city’s wealthiest Jews – was criticized by state regulators for lax oversight and mismanagement as a result of the Rapfogel scandal and the organization’s government funding was cut off for a period of weeks while safeguards were put in place to prevent further thefts.

So far, none of these board members – except for Rapfogel –  have been indicted.

"These defendants abused positions of trust to steal millions of dollars from a taxpayer-funded charitable organization -- one that is dedicated to serving New York City's poor," Schneiderman reportedly said in a statement.

Rapfogel's plea deal as a downloadable PDF file [hat tip to Sfek Sfeikah for sending it to me]: