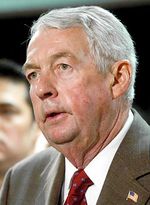 "There could hardly be a more grievous violation of legal ethics than for a prosecutor to allow a wrongfully convicted man to remain imprisoned after a miscarriage of justice has come to light. That’s why former Brooklyn District Attorney Joe Hynes and his former deputy Michael Vecchione must be scrutinized by a lawyer’s disciplinary panel that has the power to call for punishments if warranted by the evidence.…"

The editors of the New York Daily News write:

There could hardly be a more grievous violation of legal ethics than for a prosecutor to allow a wrongfully convicted man to remain imprisoned after a miscarriage of justice has come to light.

That’s why former Brooklyn District Attorney Joe Hynes and his former deputy Michael Vecchione must be scrutinized by a lawyer’s disciplinary panel that has the power to call for punishments if warranted by the evidence.

In Hynes’ case, damning facts came from his own mouth when a lawyer representing Jabbar Collins, who was sentenced to 34 years in prison in a rabbi’s murder, questioned the now-former DA under oath.

Hynes testified that as long ago as 2010, he concluded both that someone in his office was guilty of prosecutorial misconduct for failing to turn over exculpatory evidence to Collins’ defense attorney and that he had determined three witnesses whose testimony had sent Collins to prison were not credible.

Exactly when Hynes reached those conclusions is crucial.

Collins spent years digging out information to prove that he had been railroaded. Only by remarkable perseverance did he finally gather enough evidence suggesting that Vecchione had strong-armed witnesses to win a federal court review of his conviction.

He detailed his claims in papers filed before Brooklyn Federal Judge Dora Irizarry in April 2008. Hynes office vigorously defended Collins’ conviction, as the office had in several state court proceedings. But Collins’ lawyers had the green light to take testimony from key players in the prosecution.

Hynes offered to grant Collins a new trial, signaling that prosecutors still had faith both in his guilt and in the witnesses who had sent him away. After the offer was rejected, Collins’ lawyer prepared to grill Vecchione on the stand on June 8, 2010.

Suddenly Hynes announced that he would move to dismiss all charges, thus sparing Vecchione from taking the stand. But assistant DA Kevin Richardson, who carried the message to court, nonetheless declared of Collins:

“My office’s position, then and now, is we believe in this defendant’s guilt.”

For good measure, Hynes defended his prosecutors and refused to initiate an internal investigation of the alleged misconduct.

More than two years later, as Hynes was preparing for his losing reelection campaign, The New York Times quoted him as saying of Collins, “We believe he did it.”

Now, under oath, Hynes is telling a different story.

“The case which was tried . . . which resulted in the conviction of Collins,” he said, “no longer existed. It had fallen apart. Three witness were just — were basically not credible prosecution witnesses at any future trial if there was a retrial.”

He continued: “And so I authorized or directed the withdrawal of our opposition to the (dismissal) and made a decision that we would not retry Mr. Collins.”

In Hynes’ telling, he discovered the flaws in the case and acted appropriately. For that to be true, he had to have been studiously ignorant for months of how his aides were mishandling one of the most controversial cases of his tenure. Then, when he belatedly got the picture, he gave a pass to everyone who had kept Collins in prison.

That’s how Hynes is playing it. For example, he testified that he never asked Richardson why he told a federal judge that the DA’s office still considered Collins guilty — despite Hynes’ admitted lack of evidence. He also claimed that the Times had misquoted him.

What’s clear in both cases is that Hynes never set the record straight.

Also certain is that Hynes’ testimony raises the grave question of whether he or his aides participated in a cover-up that kept Collins in prison for even one extra unjust day.

The presiding justice of the Brooklyn Appellate Division, which polices lawyer misconduct, must instruct the court’s grievance committee to put Hynes and Vecchione under oath to determine their fitness to remain licensed attorneys.

This is but one case out of, literally, dozens where Hynes and Vecchione (and others from the DA's office) played fast and loose with the law to persecute and imprison people who appear to be innocent.

And then we have the case of Samuel "Sam" Kellner, the hasidic child sex abuse whistleblower who was labeled an extortionist by an accused pedophile's attorneys and by Hynes, despite cl;ear and convincing evidence that Kellner was innocent.

The charges were eventually dropped by Brooklyn's new DA, Kenneth "Ken" Thompson, because there was no credible evidence against Kellner – all the evidence Hynes and Vechhione had was tainted, and much of it was clearly perjured.

If Hynes should be probed over the Jabbar Collins case, he should certainly be probed for his conduct in all of these other cases, including Kellner's.

And that probe should go beyond possible bar sanctions or disbarment. What Hynes appears to have done is is arguably criminal, and should be prosecuted as such, either by the State of New York or by the federal government, if evidence supports it.

And so far, it appears that the evidence does.

"There could hardly be a more grievous violation of legal ethics than for a prosecutor to allow a wrongfully convicted man to remain imprisoned after a miscarriage of justice has come to light. That’s why former Brooklyn District Attorney Joe Hynes and his former deputy Michael Vecchione must be scrutinized by a lawyer’s disciplinary panel that has the power to call for punishments if warranted by the evidence.…"