Governor Cuomo: “It is not only unconscionable, but it is flat-out illegal for any landlord to subject families to living without running water or a functioning bathroom or kitchen.” 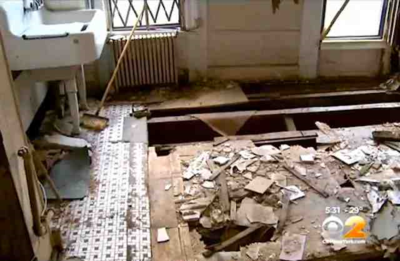 A kitchen in one of the Israel brother's apartments

Hasidic slumlords Joel and Aaron Israel are back in the news again.

New York City’s most notorious slumlords have been subpoenaed by the Cuomo Administration for trashing occupied buildings in a transparent and illegal attempt to force tenants, some who have lived there for decades and many of whom are rent stabilized, to move out, the Daily News exclusively reported.

The Israel brothers sent workers into at least two of their buildings, telling tenants they would fix their kitchens and bathrooms.

Instead, the workers used sledgehammers to destroy them, leaving kitchens and bathrooms with gaping holes in their floor and walls and appliances ruined.

Months passed but the Israel brothers refused to fix the apartments they had intentionally damaged unless tenants vacated – meaning the tenants would lose their apartments.

The city lowered tenants’ rent to $1 per month until the brothers fix the apartments, but they still continue to refuse to do so.

So after more months passed the state has finally stepped in to try to force the brothers to comply with the law New York City’s mayor seems powerless to enforce.

“It is not only unconscionable, but it is flat-out illegal for any landlord to subject families to living without running water or a functioning bathroom or kitchen," Cuomo said.

“This is obviously not the way that responsible landlords renovate apartments; these apartments were trashed,” New York State Housing Commissioner Darryl Towns, said.

Brent Meltzer, one of the heads of the Housing Unit at Legal Services NYC-Brooklyn Programs, said he had never seen “such abhorrent behavior from a landlord.”

Through their attorney, the Israel brothers denied the allegations against them.

Many of the tenants in the buildings the Israel brothers trashed are rent stabilized. New tenants in a newly remodeled building would pay more than four times the rent current tenants pay.

But in buildings the brothers own that have been remodeled, tenants also complain about how the brothers treat them and run the buildings.

"When we first got here, we had no heat or hot water for three or four weeks. And it was in December.There's mold in the basement. All of this construction was really poorly done. There's always standing water in our backyard.…There used to be a lot of old people, but all of them have left,” a tenant at 119 Boerum St. in Williamsburg, who moved in 18 months ago and pays $3,150 a month (with three roommates) told the Daily News.

Hasidic Slumlord in Court Over Abuse Of Tenants.

Governor Cuomo: “It is not only unconscionable, but it is flat-out illegal for any landlord to subject families to living without running water or a functioning bathroom or kitchen.”