"Your obligation is to raise your children the way this country has guaranteed children be raised." 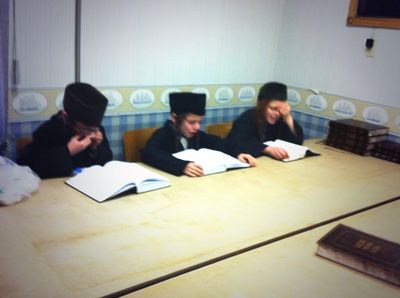 Lawyers for the haredi Lev Tahor cult and the Chatham, Ontario, Canada Children’s Services were back in court Friday, Canadian media reported.

Justice Linda Templeton said she will decide next week whether to uphold a November Quebec court ruling that 14 Lev Tahor children should be removed from their homes due to abuse and neglect.

"In order to rehabilitate, access is usually the vehicle by which we foster the relationship. I am going to ask for immediate access, extended access between parents and children. But because of the actions of the community - the access has to be supervised. Because I can trust you will take-off again,” Templeton said, adding that she would try to assure that the “children are not lost in what has turned out to be a procedural nightmare.”

Templeton also noted that the court’s job is to determine whether the legal obligations parents have to their children are being met by these Lev Tahor parents.

"Your obligation is to raise your children the way this country has guaranteed children be raised," Templeton said.

Six of the 14 children are in the custody of child protection services in Ontario after being returned to the country after fleeing to Trinidad and Tobago (from where they planned to travel to Guatemala).

Two of the remaining eight children – a teen mother and her child – were apprehended in Calgary before they could leave the country.

The six remaining children are in Guatemala with their parents.

In a nine page letter written to Templeton, the parents denied all allegations of abuse and neglect and claimed that they are not in Guatemala in contempt of court but are there instead to preserve religious freedom for their children. They asked that two of their children, who were among the group returned to Canada from Trinidad, be allowed to travel to Guatemala to join them. They also wrote that they have no plans to return to either Ontario or Quebec.

On top of that, they wrote that they were pressured by undercover police officers in Guatemala and that when they appeared before a Guatemalan judge he "made scary faces" and asked on behalf of the Canadian embassy for the parents to voluntarily return the rest of the children to Canada.

The teen mother apprehended in Calgary also wrote Templeton, telling her that she was released from custody this week and is now back in Lev Tahor’s compound in rural Ontario.

She claimed she fled to Calgary "with the sole purpose of saving my baby from being a life orphan for no reason,” and said she had planned to leave Canada from there to reunite with her husband in Mexico.

An emergency hearing to discuss full access to the children by their parents will reportedly be heard Tuesday. Templeton will then render her decision on Wednesday.

"Your obligation is to raise your children the way this country has guaranteed children be raised."