« Jew Who Converted To Radical Islam Gets Prison Sentence For Encouraging Attacks On Jews, Others | Main | Alleged Haredi Pedophile One Step Closer To Deportation »

Food shelves are now mandated to stock emergency supplies of kosher and halal food, as long as it doesn't cost more than its non-kosher counterparts. 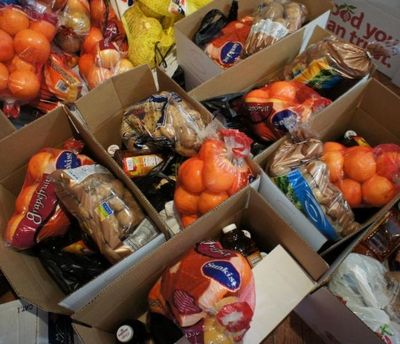 The AP has an insipid article on a new federal law that requires the USDA to make sure that food shelves in areas with large Jewish or Muslim populations have adequate supplies of kosher or halal food – as long as its base cost is no more than equivalent non-kosher or non-halal food.

This means food shelves will have tuna and salmon with standard kosher supervision, like that from the OU, but almost certainly not beef or chicken or lamb.

What makes the AP's article so weak are two things;

1. It's reporter's complete lack of understanding of food production and related costs.

2. It's reporter's and editors' complete failure to know the background of the people they interviewed.

So the AP interviewed the new CEO of the Metropolitan Council on Jewish Poverty without ever mentioning the nonprofit's previous CEO, William E. Rapfogel; its top organizational consultant and former CEO Rabbi David Cohen; another top Met Council executive; and the Met Council's hasidic insurance broker, Joseph "Yossi" Ross; stole at minimum $7 million from the New York City Jewish Community's anti-poverty arm – money that should have been used to feed or house the poor.

But even though though the guilty pleas of Rapfogel and Cohen were big news last week, the AP's reporter and its editors appear not to be aware of them – or of the entire scandal:

The Jewish philanthropic organization, which worked with lawmakers on the farm bill provision, praised the government’s efforts but acknowledged it won’t meet every need. Chief executive David Frankel believes some items, such as canned vegetables and tuna, will be available but he doesn’t expect chicken to meet the price requirement because it’s more labor intensive.

“We recognize it would be hard to ask the government to go out and buy more expensive food,” said Frankel, who oversees a pantry that provides food packages to 15,000 households each month.…

Those thefts took food and shelter away from poor people.

Neither fact is mentioned in the article.

Many donors lack confidence in the Met Council and the nonprofit's ability to run its programs has been justifiably hurt as a result.

The Met Council's food distribution has been cut and the nonprofit fired five top mid-level employees early this month when it was no longer able to pay them.

The AP doesn't mention that, either.

Yet the AP, when looking for a Jewish nonprofit to quote, went to the Met Council.

The Met Council was one of the organizations that asked the USDA to change the way it operates in order to make sure food shelves had kosher food.

And the AP's article is datelined Detroit. And the sad truth is that outside of New York City and to a lesser extent Chicago, Jewish communities do very little for the poor, Jewish or non-Jewish. They lack food shelves and shelters and pretty much every else poor people often need to rely on.

This doesn't mean there aren't poor Jews – there are.

What it means is that the Jewish community does a very poor job of helping them.

So the AP's reporter wouldn't have had an easy local phone number to call for a quote.

There are far better choices in New York City than the Met Council to talk to about this new law – Masbia or Bnai Raphael,  to name two.

To write a story about poverty and food and to quote the Met Council without mentioning the millions of dollars its top leaders stole from the poor is inexcusable.

Food shelves are now mandated to stock emergency supplies of kosher and halal food, as long as it doesn't cost more than its non-kosher counterparts.