A city-sponsored public Mimouna celebration in the costal city of Ashdod was illegally gender segregated by haredim, angering many non-haredi residents.

A city-sponsored public Mimouna celebration in the costal city of Ashdod was illegally gender segregated by haredim, Ynet reported.

A public invitation to the post-Passover celebration held Monday night (Passover is one day shorter in Israel than in the diaspora due to ancient concerns about errors in calendar-keeping) warned that the traditional Sefardi North African celebration and feast marking the end of Passover would be a male-only event, despite the fact that there is no history of such events being for one gender only and despite the fact that gender-segregated publicly sponsored events are illegal in Israel.

The invitation carried the city hall logo and logos of institutions affiliated with the Sefardi haredi Shas Party.

City municipality representatives later claimed the municipality never agreed to sponsor the event and said the city hall logo was used without permission.

Even so, at least two public officials were still scheduled to attend the gender-segregated event

Sefardi haredi Chief Rabbi of Israel Yitzhak Yosef was listed on the invitation as a speaker as was Yechiel Lasri, Ashdod’s mayor, and both were expected to participate, despite the gender segregation.

Many non-haredi Ashdod residents were reportedly up in arms.

"I can't remember such an event where women weren't allowed to attend. I won't be surprised if women work on preparing food for the event, but won't be let in. It's hard for me to believe that such [gender segregated] events are held in Ashdod in 2014," an Ashdod resident told Ynet, adding that she expects public officials, especially the mayor, to boycott the event which "sends a very, very clear message that we live in a city that's managed in ways that are identified with the past." 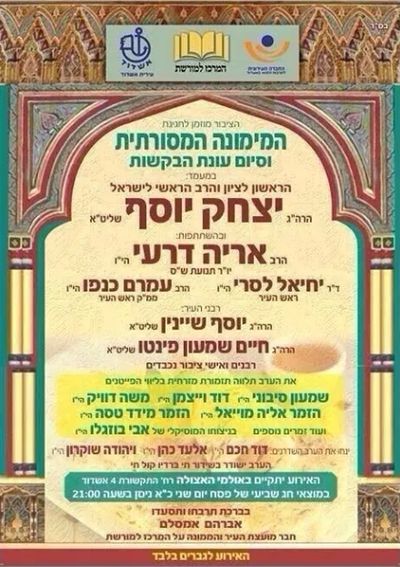 A city-sponsored public Mimouna celebration in the costal city of Ashdod was illegally gender segregated by haredim, angering many non-haredi residents.