Haredi über-thief Eliyahu Weinstein was allegedly emotionally and sexually abused as a child. Here is the story of that alleged abuse as told to the court by a family friend during Weinstein's sentencing hearing. 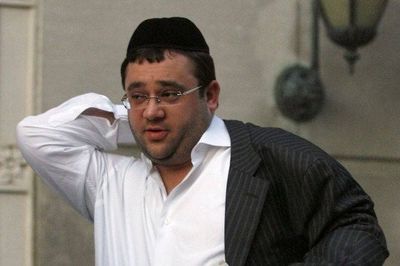 From the court transcript of Eliyahu Weinstein's sentencing hearing:

Respectfully ask the Court if the Court could hear
from Rabbi Freundlich, a family friend of Mr. Weinstein.

MR. YUROWITZ: He was in the courtroom a moment ago.
I think he just stepped out.

I go back with Eli a long time, I'm much older than
Eli. I knew Mayer very well, Eli's grandfather, and his
extended family. I was very close to the family.

And from that, Eli was sent to an uncle and lived for
a period of time with his uncle. I'll explain a little bit.

I know Eli very well. We studied together for a long
time. We had a study session and I'm not going to give you my
perspective, what I want to do is that I'd like to share with
you how Eli would pour out his heart and share his pain with
me.

THE COURT: His pain, is that what you said?

RABBI FREUNDLICH: I said his pain, yes. My father
came from Czechoslovakia and when my dad would discipline me,
he was of the generation that he'd take off his belt and I got
my beating. I got older, I went to Yeshiva, my principal was
an Italian fellow, a gentleman, Mr. Archangelo and everyone
knew that Mr. Archangelo had a paddle in the office. That was
discipline in those days.

I'd like to share with you, your Honor, how Eli's
parents disciplined him. I can tell you that I never --his
parents, first of all, you'll meet them, today they're
wonderful people. They've learned from mistakes. They are
wonderful people today, but sometimes in religion, his father
is a giant, truly a giant.

We go to extremes. His father used to discipline him
in a way that I feel was horrific. It was vicious. He would
beat him like any father in those days. Many children, many
people believed in hitting a child, but, sir, after he would
beat him, you know what he would do? He would stick out his
hand and he would tell --he'd make the boy kiss the hand that
beat him. To me, that's vicious, that's cruel, that's wicked,
that's so traumatic for a child. That isn't discipline,
that's breaking someone.

When he was a child, the most happy thing with
children, you go to a party, a birthday party in school. We

have in our religious schools, whenever there's --they finish
studying a portion of scripture, we have a little party. His
father used to call the house of the birthday party, or call
the school and would tell them, he's not to have any sweets.
It didn't live up to his parents' religious standards and he
would just sit there and watch as other children, other kids
enjoying themselves and his parents' extremism, how it hurt
the child.

Eli got older and he went --he was sent away. To
the school he was sent to in our circles was the best in the
country, it was an excellent school, a religious school. As
is in such schools, there's a dormitory and the younger boys
have mentors. Eli was in ninth grade, a cute young kid. His
mentor was an older boy and for months in ninth grade he was
sexually abused by that mentor. Continued through 10th grade,
the sexual abuse and finally Eli couldn't take it. He went to
the administration and, as is in private schools, you can
imagine, the mentor was from a very wealthy, well-to-do
established family, it was a well-to-do school.

We know how it was in the '80s. He complained, so
what do you think happened when a child would complain against
such a person? He was expelled from the school. Then began a
long saga; he went from school to school. That's where I met
him in his uncle's house.

Your Honor, they never apologized to him. It's hurt
him so. To this day, they never would apologize for not going
to his wedding. He was so hurt.

He was an abused child, physically and sexually. He

tried to overcome this.

He's become a very generous and loving and
understanding father and member of the community. And when I
say "generous", I'm not talking about Robin Hood, I don't want
to talk about that because that's not generosity and charity
and kindness. When I talk about kindness and charity, I'll
give you an example. He would never say no to anyone. He
took into his house, I saw it, there was a sexually-abused
girl from Israel. This girl was in such terrible shape. He
would take her into his house.

We have, coming from Israel, every person coming for
charities and other things, misfits and he had an open house
for everyone.

Sir, you know, I know I was speaking, I went to pray
this morning. I went to a grave and I stood over this grave
and I cried. I want to tell you whose grave it was. The
man's name was Maher Rupen. Who is Maher Rupen? Maher Rupen
was a man in his late '30s, a wonderful guy. He was a success
story, had a wonderful wife, had four, five kids. He
developed cancer in his liver. He was going fast and he
needed a transplant and he knew, he was told there was a long
line. When you have cancer in the liver, there is no time for
a long line, sir.

What do you do? He had four little children, he's
dying. They told him, if you need help with something and you

got a brick wall in front of you, go to Eli Weinstein and
he'll help. I don't know how he did it, sir. This is not
Robin Hood, this is not money. He called this person and that
person and he got this man a liver transplant. This man lived
almost a year. His wife, his children, they had their daddy
and that was Eli, giving of himself. He was always a loving
father.

We'd be studying. He could have an important phone
call, he'd take the phone call and he'd be on a very serious
call and you could tell what's serious and his son would come
in from school. Sir, he did what many fathers don't do. He's
on this important call, his son walks in, life stopped, he
dropped the phone. Yisroel Meir would come in and say I got
to tell you what happened in school today, daddy. Life would
stop, no matter what he was in, to give love to his children.

Mrs. Weinstein told someone I was speaking, I got a
phone call from a woman a few days ago. She was divorced and
from an abusive marriage, very abusive. She has two kids so
as happens in these situations, the ex or someone in his place
had called her on the phone and harassed her. She got off the
phone and she broke down in tears. She couldn't take it, she
couldn't cope.

you want me to call Eli Weinstein? She said why? She said,
whenever he sees us crying, he makes us stop, he will make you
stop crying also. That was Eli. His sensitivity to others,
his feeling for others, not money, himself.

Himself as a generous person giving of himself. That
was his character. He always give of himself, he never said
no and he never took no for an answer.

He's someone that he's a sick man. That helps
unfortunately manifest terrible things. I appeal to your
Honor for compassion, to realize the life that he's gone
through, how he himself suffered. He, himself, suffered and
how he, himself, was abused and he's never had any therapy.
His parents didn't believe in it.

I appeal to your compassion to understand how he,
himself, has suffered; how he, himself, has brought happiness
to other people.

At least one other criminal case against Weinstein is pending – he allegedly stole millions of dollars from a New Zealand sheep rancher and his family while out on bail for the charges he pleaded guilty to – along with many civil lawsuits.

Haredi über-thief Eliyahu Weinstein was allegedly emotionally and sexually abused as a child. Here is the story of that alleged abuse as told to the court by a family friend during Weinstein's sentencing hearing.