Rabbi Avigdor Miller: Hitler Was A "Kindness From Heaven"

"…My great uncle, Rabbi Avigdor Miller, a widely respected yeshivish rabbi, wrote: 'Hitler was not only sent by Heaven, but was sent as a kindness from Heaven…. Because assimilation and intermarriage are worse than death.'…” 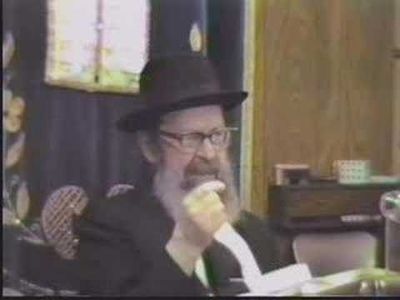 Leah Vincent writes in the Forward that when she went to Germany to visit a friend who is an ex-Satmar hasid, the trip brought back memories of Holocaust stories told her during her haredi childhood. That troubled her, and she confided in her friend.

Her friend told her that as a child, he celebrated the anniversary of the day the ‘Red Cross’ ‘miraculously’ rescued the Satmar Rebbe Rabbi Yoel Teitelbaum from the Nazis. But he later found out that his Rebbe abandoned his followers and was really saved by the Zionist Rudolph Kasztner, a man Satmar refuses to credit or thank.

This prompted Vincent to look into the behavior of haredi rabbis during the Holocaust:

…I learned that the Belzer rebbe and his family escaped from Hungary in 1944, a month before the Nazis came. At a major conference the day before he left, allegedly attended by thousands, the rebbe’s brother, speaking on the community leader’s behalf, did not urge the Belzer followers to also try and flee, but instead explained the rebbe’s leaving as a spiritual journey, not an abandonment.

In 1939, Rabbi Elchonon Wasserman, one of the leaders of prewar yeshivish life, forbade his students from accepting a few visas that were available to go study in the more liberal schools of Yeshiva University and the Hebrew Theological College, in the Chicago area, saying, “What is the gain in achieving physical salvation if you lose your spiritual life?”

I was crushed to learn of the choices these leaders made…these were godly leaders, believed, by their followers…to possess a “Holy Spirit” that gave them access to more information than the average mortal.…

[T]he rabbis’ political position, if not their spiritual position, should still leave them accountable for their miscalculations.…

…I also wondered if our religion played a part in our tragedy. I wondered if our faith had been less focused on the incorporeal body and more on the physical self, less on fear and more on assertiveness, perhaps more would have survived. I wondered if these qualities of Judaism were inherent to our tradition, or if they were a mutation, due to centuries of humiliating anti-Semitism, that infiltrated our culture with a kind of Stockholm Syndrome where weakness imposed on us was renamed piety, and laws that forbade us from defending our physical well-being spawned a love of spiritual defense. I wondered if the rabbis had internalized the abuse their communities suffered to shape a philosophy and code of law of fear and introversion and complete obedience, at any cost.…

My great uncle, Rabbi Avigdor Miller, a widely respected yeshivish rabbi, wrote: “Hitler was not only sent by Heaven, but was sent as a kindness from Heaven…. Because assimilation and intermarriage are worse than death.”…

Belz And The Holocaust.

Chabad And The Holocaust.

Elchonon Wasserman And The Holocaust.

Rabbi Avigdor Miller: Hitler Was A "Kindness From Heaven"

"…My great uncle, Rabbi Avigdor Miller, a widely respected yeshivish rabbi, wrote: 'Hitler was not only sent by Heaven, but was sent as a kindness from Heaven…. Because assimilation and intermarriage are worse than death.'…”