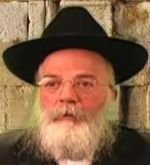 Wolpo and Weintraub allegedly contacted soldiers in the Kfir Brigade and attempted to convince them to disobey any order to evacuate West Bank settlements.

Wolpo and Weintraub also offered to pay each soldier NIS 1,000 ($287) for every day spent in military prison as a result of refusing to carry out evacuation orders from their commanders and did in fact very publicly pay several soldiers for disobeying orders and for protesting while in uniform on active duty against the IDF's evacuation of illegal West Bank outposts created by settlers.

Wolpo has a history of activity many observers believe to be seditious, but until now, the government has been unwilling to prosecute him, in part becuase of his wide popularity within Chabad and the settler movement.

Wolpo founded and heads the SOS Israel organization. He has repeatedly called for West Bank settlements to secede from Israel and, along with as much of Israel proper as possible, form their own state called Judea.

Wolpo ridiculed the indictment against him and Weintraub.

"We didn't even get the indictment, it was spread to the media before it reached us. This is a ridiculous political indictment which [State Attorney] Shai Nitzan decided on, it's an attack on the freedom of expression in Israel and is meant to silence the right [wing to prepare] for the next expulsion," Wolpo said.