« Video: Hasidic Slumlord In Court Over Horrific Abuse Of Renters | Main | Women Who Have 4 Or More Babies Have Greater Risk Of Heart Disease » 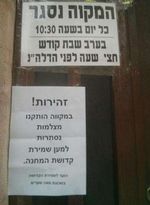 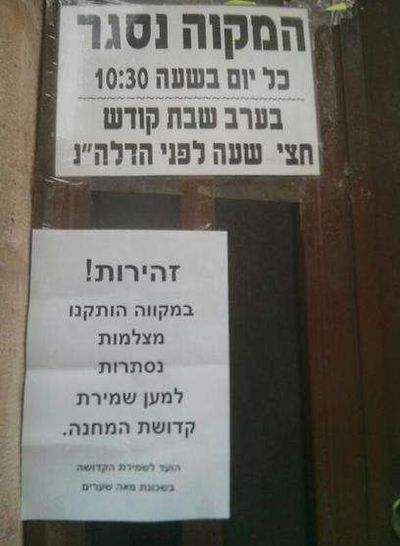 The top sign says the mikva closes every weekday at 10:20 am and on Friday afternoon 1/2 hour before Shabbat candlelighting. The bottom sign is the hidden camera warning.

A mikvah in Mea Shearim posted a warning at its entrance from a haredi modesty squad called the Committee for Keeping Mea Shearim a Holy Neighborhood announcing that hidden cameras had been installed inside "for preserving the sanctity of the [haredi] camp,” MyNet reported.

Another possible reason for the cameras cited is a number of clothing thefts that have taken place at the mikva while the owners of the clothing were immersing. The reference to the “sanctity of the camp” would then be a diversion meant to confuse the thieves, who would not have realized they were being watched. The resident who made this claim told MyNet that the reason the sign was removed is because the thieves have been caught and dealt with. However, this second version of events seems unlikely to be true.

The warning sign has now reportedly been removed and it is unclear if cameras were really installed and, if so, what the true reason for installing them is.

A previous warning was posted in area synagogues about an unnamed sex criminal.

"We advise and warn that if the harasser does not turn to us and admit [his crimes] and make a clear commitment to cease and desist, we will have no other choice but to take care of [him] immediately so that [others] will hear and and be afraid” – i.e., make an example out of him – that sign read.

In Mea Shearim, police are rarely called. Instead, residents 'deal' with crimes internally.