Rabbi Yosef Mizrahi is known for saying that non-Orthodox Jews caused the Holocaust through their assimilation and that Orthodox and haredi Jews in countries with high levels of assimilation were also responsible for the Holocaust because they did not condemn the non-Orthodox Jews strongly enough. He also says that people with autism, Downs Syndrome and cancer have these disorders in order to cleanse their souls of sins committed in previous lifetimes. 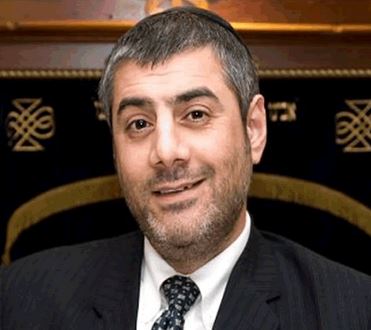 Rabbi Yosef Mizrachi is an ass, but that does not mean what he teaches is not normative haredi theology, because it is.

Mizrachi, who runs a kiruv organization in New York, spoke in London recently over the objections of many Jews who heard some of his YouTube lectures and were revolted by them.

Nonetheless, Mizrahi was welcomed into a Modern Orthodox school and was well-received by its students.

Lots of people have been harrumpfing about this and some of them have contacted me and asked me to write about it.

He also says that people with autism, Downs Syndrome and cancer have these disorders in order to cleanse their souls of sins committed in previous lifetimes.

Quite obviously, Mizrahi doesn't know much about Holocaust history.

But he does appear to know the basic theology of the Ari, the kabbalist Rabbi Isaac Luria.

Luria rather famously attributed suffering in this world – including illnesses, disorders, injuries, poverty, etc. – to sins people committed in previous incarnations. This suffering, Luria claimed, cleanses the soul and lessens or entirely eliminates the time any particular soul will have to spend in gehinom (hell) before entering the Olam Haba, the World to Come.

Rabbi Ovadia Yosef and other haredi rabbis have gotten themselves into some serious public relations difficulty by publicly attributing the Ari' s doctrine to the Holocaust.

As for who caused the Holocaust, both the 6th Lubavitcher Rebbe Rabbi Yosef Yitzchok Schneersohn and the first Satmar Rebbe Rabbi Joel Teitelbaum blamed secular Jews for the Holocaust, and the book Eim Habanim Semeicha contains an eyewitness account from a hasidic rabbi in the Hungary/Romania/Slavakia area (I forget in which country he was at when this took place) who saw and heard local hasidic rabbis tell their followers that the Nazis would not murder them because it was Zionism that caused the Nazi's wrath and we are anti-Zionist.

This theology was quite common during WW2 and shortly afterward, but largely receded into the background afterward, except for in certain hasidic groups like Satmar and Munkatch.

The late Chabad-Lubavitch Rebbe Rabbi Menachem Mendel Schneerson compared the Holocaust to a surgeon amputating the limb of an ill patient. Someone unfamiliar with surgery and the patient's illness who opens the door to the operating theater and sees what is taking place, the Schneerson said, would be shocked and repulsed and would try to stop the doctor from continuing. But the doctor is in reality saving the life of the patient, not harming him.

A firestorm erupted when Schneerson said this and Chabad and Schneerson tried to walk back (and retroactively censor) the remarks.

Schneerson would later condemn similar remarks made by Rabbi Ovadia Yosef and claim that what Yosef said was said too close to the time of the tragedy and was therefore hurtful. But he did not say the theology was wrong.

In other words, what Mizrahi says is normative – if often hushed-up – haredi theology.

What his opponents should be opposing is Luria and his kabbalah, the hasidic movement that is based on it, and today's non-hasidic haredim and Sefardim – like Mizrahi – who hold that kabbalah and/or those hasidim to be "holy" and authoritative.

Update 2-9-2014 2:56 pm – Mizrahi emailed me and said my report was “full of lies and wrong info”  and “the jc newspaper that is an anti religion secular newspaper and that they wrote an article that is simply all full of lies I am in a process of suing them in London and they will pay big time for making up this lies.”

After some back and forth, the "lies" I apparently posted based on the JC's reporting was that Mizrahi blamed Ashkenazi Jews for the Holocaust.

Instead, Mizrahi blames assimilated Jews and non-Orthodox Jews and those Orthodox and haredi Jews who were too tolerant of them. Mizrahi pointed out that he also "said in Tunisia and Greece" – in other words, therefore it wasn't Ahskenazim who caused the Holocaust, it was assimilated and non-Orthodox Jews who did so, and while the vast majority of those lived in Ashkenazi countries, not all of them did.

Mizrahi insisted this is the Torah's position:

“read it for yourself Deuteronomy 31 verse 16-19
It says clearly that god said to Moses “one day after you die this nation(Israel) will leave me and break the covenant that I made with them and I will be very angry at them and will hide myself from them completely
And many tragedies will happen to them until they will say “where is god ..there is no god upon us”  and in this text you have the word holocaust ((השואהhidden in equal skip of 49 letters it’s very clear
And this is ALL what I said ,I am not blaming anyone anywhere I am reading only what the torah says ,not my opinions ONLY what the torah says
You don’t like it write an article against the torah and not against the delivery guy that in this case was me but it was said by thousands of other rabbis before me in seminars in videos in articles etc..
I said nothing new here”

Which is, of course, what I originally reported – minus Mizrahi's reference to the long discredited Torah codes infamously made famous by Aish HaTorah, which arguably knew them to be false but promoted them anyway.

Rabbi Yosef Mizrahi is known for saying that non-Orthodox Jews caused the Holocaust through their assimilation and that Orthodox and haredi Jews in countries with high levels of assimilation were also responsible for the Holocaust because they did not condemn the non-Orthodox Jews strongly enough. He also says that people with autism, Downs Syndrome and cancer have these disorders in order to cleanse their souls of sins committed in previous lifetimes.