Sefardi Kabbalist Looted Charity, Obstructed Justice, Threatened Police And Witnesses, And Tried To Bribe His Way Out Of A Looming Indictment 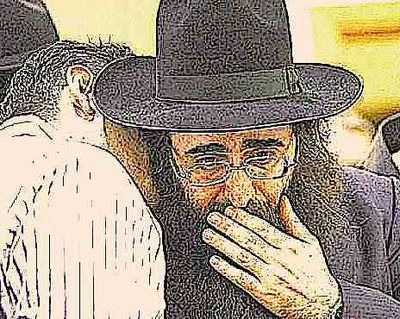 He appears to be a Mafioso in all but name only.

Pinto – who denies all the allegations against him – reportedly waived his right to a preliminary hearing and prosecutors are now working on an indictment of Pinto.

The looming charges are based on the case of the now-defunct Hazon Yeshaya charity, which was headed by one of Pinto’s close associates, Avraham Israel. What follows is a summation based on Ha’aretz’s reporting of the contents of that 10-page police document:

In 2011, some Hazon Yeshaya employees believed Avraham Israel was embezzling money from the charity and demanded that he resign.

Instead, he asked Pinto for help. Pinto agreed.

Avraham Israel transferred control of Hazon Yeshaya and all of its assets to Pinto.

Pinto then appointed several of his associates to the Hazon Yeshaya board.

The Pintos then “made use of this money for their personal affairs, such as paying for flights and hotels, paying their children’s nannies, money for their relatives, and legal fees,” the police document reportedly says.

In December 2011, a complaint was made to police about the situation at Hazon Yeshaya.

That complaint sparked an undercover investigation of Avraham Israel and the charity.

Pinto found out – how he did is not yet clear – and “decided to obstruct the investigation,” to prevent police from uncovering incriminating evidence against himself, his wife and Avraham Israel be found.

Pinto also “began gathering information about the progress of the investigation and the people conducting it,” including senior police officers.

To further hinder the police investigation, in January 2012, Pinto ordered Avraham Israel not to return from a trip abroad. Israel listened to Pinto and stayed overseas for four months.

Pinto also pressured the people who complained to police about Avraham Israel and Hazon Yeshaya to “recant…their testimony to the police.”

Pinto also made religious threats against these people, most of whom are Orthodox Jews and traditional Sefardim.

Pinto also tried to bribe Hazon Yeshaya employee David Simantov by paying him 150,000 shekels ($43,000), because Pinto believed Simantov’s testimony could be “decisive.” That bribe money was transferred from Pinto’s wife Rivka’s US personal bank account to Simantov’s personal account on March 29, 2012. Simantov was arrested the following month, but refused to talk to police for a long time after that.

About this point in time, Pinto met with Major General Menashe Arviv, who was then the Israel Police representative in the US. Pinto tried to get information about various criminal cases involving himself from Arviv. Pinto also offered to help the police with a different investigation if Brigadier General Ziva Agami, then the head of the Israel Police national fraud squad who was in charge of the Hazon Yeshaya probe, if Agami was removed from the fraud squad and from Pinto’s cases. Pinto also demanded the head of the international investigations division, Brigadier General Haim Ifergan, be removed from his position in exchange for Pinto’s help on that case.

Pinto then tried to bribe Brigadier General Ephraim Bracha, who was the head of a police investigative unit.

Bracha first met Pinto in 2007. The two men became very close, meeting frequently and also speaking frequently by by phone. Pinto spoke to Bracha about various criminal cases in the US in which he was a complainant and asked Bracha questions about his work, and they also discussed personal matters. Pinto’s wife Rivka spoke with Bracha by phone as well, as well. “Bracha greatly admired the rabbi and saw him as a spiritual authority,” the police document reportedly says.

In February 2012, Bracha was forced to take a leave of absence from the police due to an unnamed personal problem involving a relative. Bracha told almost no one about this personal problem, but he told Pinto.

At about that time, police questioned one of Pinto’s close associates, and both Rabbi Pinto and his wife thought they would be next.

Pinto then visited Bracha at his home and tried to give him a pair of tefillin (phylacteries) Pinto had worn to pass on to the relative in trouble.

Bracha said he could accept only if he paid Pinto the price of a new pair of tefillin, and Pinto “understood from Brig. Gen. Bracha that accepting the tefillin without paying for them would be a bribe.” Pinto agreed to accept payment.

In July 2012, police questioned Pinto and his wife about Hazon Yeshaya.

In August 2012, Pinto invited Bracha to meet with him at the Hilton Hotel in Tel Aviv. At the meeting, Pinto asked Bracha about the Hazon Yeshaya investigation and asked if Bracha believed Pinto would be indicted.

Pinto then offered Bracha a large bribe – $200,000 – “on the assumption that if the gift was worth a lot, Bracha would drop his objection to receiving favors from him, and this would increase Bracha’s willingness to help the rabbi by giving him information and exerting influence over decisions on their case,” the police document reportedly says.

A few days after that, Bracha returned from his leave of absence and told the head of the police investigations division, Yoav Segalovich, about his meeting with Pinto at the Hilton.

Four days later, Bracha went to another meeting with Pinto at the Hilton – but this time, Bracha was apparently wearing a wire.

At the end of that meeting, Pinto said his wife wanted to meet with Bracha’s wife.

Bracha tried to ask Pinto a question, but Pinto stopped him and said, “Don’t talk.”

Shortly after that, the Pintos went abroad for a short time. While outside of Israel they still tried to get information about the Hazon Yeshaya investigation from Bracha by phone.

On September 13, 2012 Bracha brought his wife – who was wearing a police wire – to the Tel Aviv Hilton where she met privately with Pinto’s wife. “I owe you our entire lives,” Rivka Pinto told her. Rivka Pinto then handed over an envelope containing 100,000 Swiss Francs (about $112,000) and told Bracha’s wife that Sukkot, “the rabbi wants to give Ephraim another $100,000.”

The Pintos then went abroad again for a short time, but continued to try to get information about the Hazon Yeshaya investigation from Bracha by phone.

In October 2012, police arrested the Pintos. Both were questioned them under caution. When police investigators allowed Pinto to meet with his wife, he put his hand over his mouth and told her, “Insist on your right to remain silent.”

After a courtroom hearing that saw the Pintos released on bail, Pinto threatened Police Superintendent Assaf Wallfish, who had become the chief investigator in the case. “I know how to deal with you…You’ll know in the coming days,” Pinto said.

Sefardi Kabbalist Looted Charity, Obstructed Justice, Threatened Police And Witnesses, And Tried To Bribe His Way Out Of A Looming Indictment