Avihai Weinstein and Eli Cohen, who own R.S.P. Rebuilt Spare Parts in Binyamina, Israel, are reportedly under investigation by both the Israel Police and Israel’s Defense Ministry’s security investigation division. 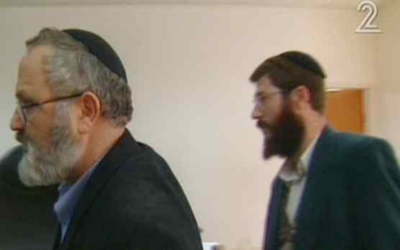 Two hasidic Israeli arms dealers have been arrested for allegedly selling military aircraft parts to Iran, the Times of Israel reported based on a report by Israel’s Channel 2.

Avihai Weinstein and Eli Cohen, hasidic brothers-in-law who own R.S.P. Rebuilt Spare Parts in Binyamina, Israel, are reportedly under investigation by both the Israel Police and Israel’s Defense Ministry’s security investigation division.

Both men live in Kiryat Premishlan neighborhood of the haredi city of Bnei Brak and are considered “integral parts of the [haredi] community,” VIN reported.

“Don’t forget, the other times they left without any charges,” a haredi source reportedly said, referring to several other times the pair had been investigated for attempting to break the arms embargo to the Islamic state, while another anonymous source haredi source reportedly said Weinstein and Cohen “are very wealthy men who help a lot of people [and who] have never said anything against Israel.”

Israel Police reportedly declined to officially confirm the arrests to The Times of Israel because the matter, which was known to them, is under investigation by foreign law enforcement agencies.

Earlier this week, Greek security officials and the US  Department of Homeland Security uncovered two shipments of spare parts for F-4 Phantom jets made in December 2012 and again in April 2013, a report the Greek daily newspaper Ekathimerini reportedly said over the weekend.

Weinstein and Cohen reportedly have both been investigated several times times for allegedly trying to sell military equipment to Iran in violation of international sanctions Israel claims to support. They previously allegedly tried to ship arms to Iran from the United States, Germany, Thailand and Portugal, according to Channel 2. Cohen has been reportedly been investigated six times these charges over the past 12 years.

A decade ago, Cohen and Weinstein allegedly attempted to sell Hawk missiles and radar systems used in Phantoms fighter jets. Two years before that they allegedy tried to sell parts for Israeli-made armored personnel carriers, but were not indicted. The alleged attempts were reportedly reported by Ha'aretz in 2004.

Channel 2 reported that Cohen had been under house arrest in the US and paid hundreds of thousands of dollars in fines there, but Israeli authorities allegedly were unable to prove Iran was really the actual end destination for the arms shipments.

Cohen had his license to sell arms restored, as a result – although he is still being investigated on those earlier charges, Channel 2 claimed.

Avihai Weinstein and Eli Cohen, who own R.S.P. Rebuilt Spare Parts in Binyamina, Israel, are reportedly under investigation by both the Israel Police and Israel’s Defense Ministry’s security investigation division.