Hypocrisy: Rabbis, Israeli Politicians Lash Out Against Danish Slaughter Ban – Even Though There Has Been No Commercial Kosher Slaughter In Denmark For A Decade

"European anti-Semitism is showing its true colors across Europe, and is even intensifying in the government institutions. I urge the Danish ambassador to prevent the implementation of the decision to ban kosher slaughter. [Israeli Foreign] Minister [Avigdor] Lieberman must summon him for a clarification,” Deputy Religious Services Minister Eli Ben Dahan fumed. 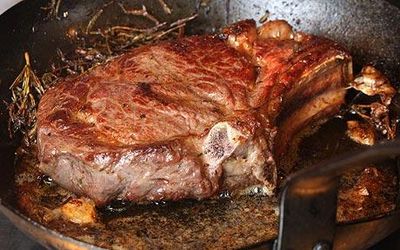 Hypocrisy: Rabbis, Israeli Politicians Lash Out Against Danish Slaughter Ban – Even Though There Has Been No Commercial Kosher Slaughter In Denmark For A Decade
Shmarya Rosenberg • FailedMessiah.com

Kosher slaughter is the most humane of all existing methods [of slaughter] and prevents animal suffering," Israel’s haredi Ashkenazi Chief Rabbi David Lau said late last week with absolutely no proof to back up his statement.

Lau and other Israeli politicians, including Minister of Religious Services Naftali Bennett and Deputy Minister of Religious Services Rabbi Eli Ben Dahan lashed out late last week, Ynet reported, against a new Danish regulation instituted by the Danish Agriculture and Food Minister Dan Jørgensen that effectively bans shechita (kosher slaughter) by banning all slaughter of animals that have not first been stunned or anesthetized.

"I will speak to Denmark's ambassador to Israel and government officials in Denmark, and if this serious decision has indeed been made, we will demand its cancellation. This is a serious and severe blow to the Jewish faith and to the Jews of Denmark!” Lau fumed.

However, there has been no kosher slaughter in Denmark for over a decade and the new regulation has no practical effect on the Danish Jewish community. The regulation will most likely only impact halal (Muslim) slaughter.

"We will stand by the Jewish community and look into ways to help them as soon as possible. This decision benefits neither the animals nor Jewish tradition nor human rights,” Bennett said afterward, citing no evidence to support his animal welfare claim while adding that he had both offered to help Denmark's Jewish community and instructed Religious Services Ministry workers to monitor the situation and to try come up with solutions to it.

"European anti-Semitism is showing its true colors across Europe, and is even intensifying in the government institutions. I urge the Danish ambassador to prevent the implementation of the decision to ban kosher slaughter. [Israeli Foreign] Minister [Avigdor] Lieberman must summon him for a clarification,” Ben Dahan fumed.

However, Rabbi Yair Melchior, the Chief Rabbi of Copenhagen – the city where over 90% of Denmark’s 6,000 Jews live – told IDF Radio today that Jørgensen’s decision was not anti-Semitic, Arutz Sheva reported.

“It is definitely not anti-Semitism. This minister is known for his animal rights activism. To say ‘anti-Semitism’ is not only inaccurate, it hurts the cause,” Melchior said.

The Conference of European Rabbis also lashed out against Jørgensen's decision, insisting that Jørgensen's statement that “animal rights come before religion" is outrageous, contradicts the European Convention, and violates freedom of religion and conscience. "Although there is no organized kosher slaughter in Denmark, and the decision came following the Muslim's halal slaughter, there is a lot of anger in the European Jewish world over this shameful decision,” the Conference of European Rabbis head, Rabbi Pinchas Goldschmidt, insisted.

Jørgensen did tell Denmark’s TV2 television news last week that “animal rights come before religion.” But Jørgensen added that he supports ritual slaughter as long as unnecessary animal suffering is eliminated. And that, Jørgensen said, can only be done by stunning animals before they are slaughtered.

Some Muslim imams allow pre-stunning and the slaughter they endorse would not be banned by Jørgensen’s ruling.

Meanwhile, Rabbi Menachem Margolin, the head of a Chabad front group, the European Jewish Association (EJA), reportedly sent a letter to the Danish Ambassador to the European Union, the Danish prime minister and parliament speaker, insisting that the new slaughter ban "hurts Jews not only in Denmark, but in other places across Europe.…Kosher butchering is essential for the continuation of Jewish life.” Margolin reportedly vowed that his organization would "fight against this injustice vigorously" just as is doing against a similar ban in Poland and against a proposed ban on ritual circumcision in Norway.

Last week, a top aide to Poland’s Orthodox chief rabbi – and, arguably, the chief rabbi himself – was caught lying to the government about kosher slaughter, claiming animals he wanted to have kosher slaughtered would be pre-stunned when that was in fact a lie. The revelation caused a nationwide scandal Margolin and the rest of the rabbis and politicians criticizing Denmark have failed to address.

Margolin – who is widely considered to be a rabble-rouser and a thug by non-Chabad rabbis – also reportedly discussed the Danish ban with European Commissioner for Health and Consumer Policy Tonio Borg.

Margolin said he plans on asking the Danish government for clarification on this issue.

The USDA found against Agriprocessors and Catelli Brothers and shut down Catelli Brothers for almost three weeks. The case against Adom Adom resulted in criminal charges in Israel against some of the worst animal abusers and charges may still be filed in the Soglowek case.

Late last year, Lau ruled that the meat produced by Soglowek was not kosher due to the animal abuse, but he quickly walked back that ruling late last year after being attacked by a large number of haredi rabbis who insisted the abuse did not violate kosher food laws.

Bennett, Ben Dahan, Goldschmidt and Margolin have all failed to address these scandals and the Israeli and world Jewish news media has largely reported the story of Denmark's new slaughter ban completely without context, making no mention of the new Polish scandal or the many humane slaughter violations documented at kosher slaughterhouses worldwide – violations, some argue, that are largely unnecessary and which result primarily from uncaring rabbis and bad practice.

Hypocrisy: Rabbis, Israeli Politicians Lash Out Against Danish Slaughter Ban – Even Though There Has Been No Commercial Kosher Slaughter In Denmark For A Decade

"European anti-Semitism is showing its true colors across Europe, and is even intensifying in the government institutions. I urge the Danish ambassador to prevent the implementation of the decision to ban kosher slaughter. [Israeli Foreign] Minister [Avigdor] Lieberman must summon him for a clarification,” Deputy Religious Services Minister Eli Ben Dahan fumed.