In most democracies, Rabbi Moshe Abutbol would be toxic and no politicians would want to be seen within miles of him. But not Israel. 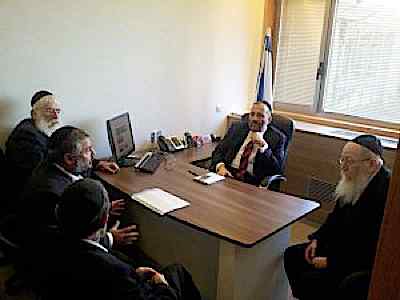 You are an embattled mayor.

One of your closest confidants and seven of his associates have been arrested on suspicion of committing widespread election fraud on your behalf.

The Supreme Court has just upheld a lower court ruling that says that election fraud was so widespread and so pervasive that the city’s recent election results must be voided and new elections must take place.

Both before and after the Supreme Court’s decision, you poo poo the election fraud committed on your behalf and claim that holding a new election because of it is “undemocratic” and “overturns the will of the people.”

In most democracies, you would be toxic. No politician would want to be seen within miles of you.

Sitting and smiling with Abutbol in the office of Shas Party Chairman Member of Knesset Aryeh Deri – himself a felon convicted of bribery and breach of public trust – were Members of Knesset Rabbi Yaakov Litzman, Meir Porush, and Rabbi Moshe Gafni, all of the Ashkenazi haredi United Torah Judaism Party which had backed Abutbol in the election disqualified by the Supreme Court only hours before.

In Israeli politics, there is no shame.

In most democracies, Rabbi Moshe Abutbol would be toxic and no politicians would want to be seen within miles of him. But not Israel.